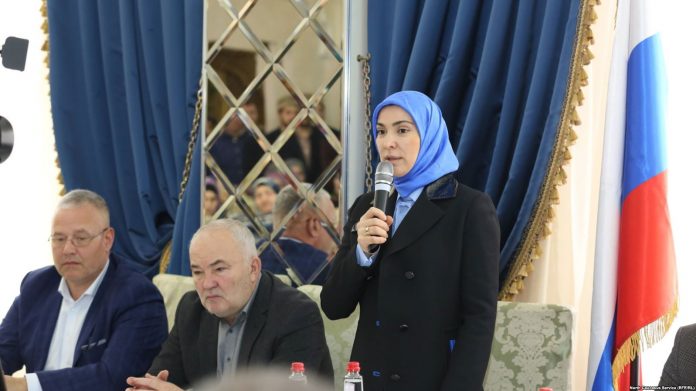 Aina Gamzatova, a 46-year-old woman from Dagestan, has made it official. She wants to run against Russian President Vladimir Putin in the March 2018 election.

Hundreds of her supporters gathered around her to celebrate in Makhachkala, Dagestan’s capital, on Saturday, two days after she confirmed her bid in a Facebook post.

Her husband, Akhmad Abdulaev, is the Mufti of Dagestan, Russia’s troubled province where a confrontation between fighters, clans and federal forces has killed thousands.

She belongs to a Sufi order that has tens of thousands of followers and whose leader, Said-Afandi Chirkavi, was killed by a female suicide bomber in the Caucasus in 2012.

Muslim leader Said Muhammad Abubakarov, Gamzatova’s first husband, was blown up in his car back in 1998. His killers have never been found, but he publicly lambasted “Wahabbis” – a term Gamzatova often uses to describe the fighters she wants to get tough on.

They are “duplicitous” and “blood-thirsty”, she has said in books and speeches, despite death threats and the killings of other Sufi-affiliated figures in Dagestan.

While some say she should not step outside her husband’s shadow, others applaud her determination.

“What about the moral teachings that a woman can’t even leave her house without her husband?” Patimat Ibragimova, an observant Muslim mother of two from Dagestan’s Makhachkala, told Al Jazeera. “Or she can, and the law is for us, mere mortals?”

Aisha Anastasiya Korchagina, an ethnic Russian convert to Islam who works as a psychologist in Moscow, said: “She was brave enough to use her legal right, that is granted to every Russian national, to run for president, she is brave enough to run a decent election campaign.”

Some see her campaign – irrespective of its results – as a way to boost the image of Muslim women in Russia and to attract attention to the needs of impoverished, overpopulated and multi-ethnic Dagestan.

“Even if she loses, people will know that a girl in a hijab [a headscarf worn by many Muslim women who feel it is part of their religion] is not just a mother or a woman, but is also an educated, wise and respected woman,” former Olympic champion in boxing and Dagestan’s deputy sports minister Gaidarbek Gaidarbekov wrote on Instagram.