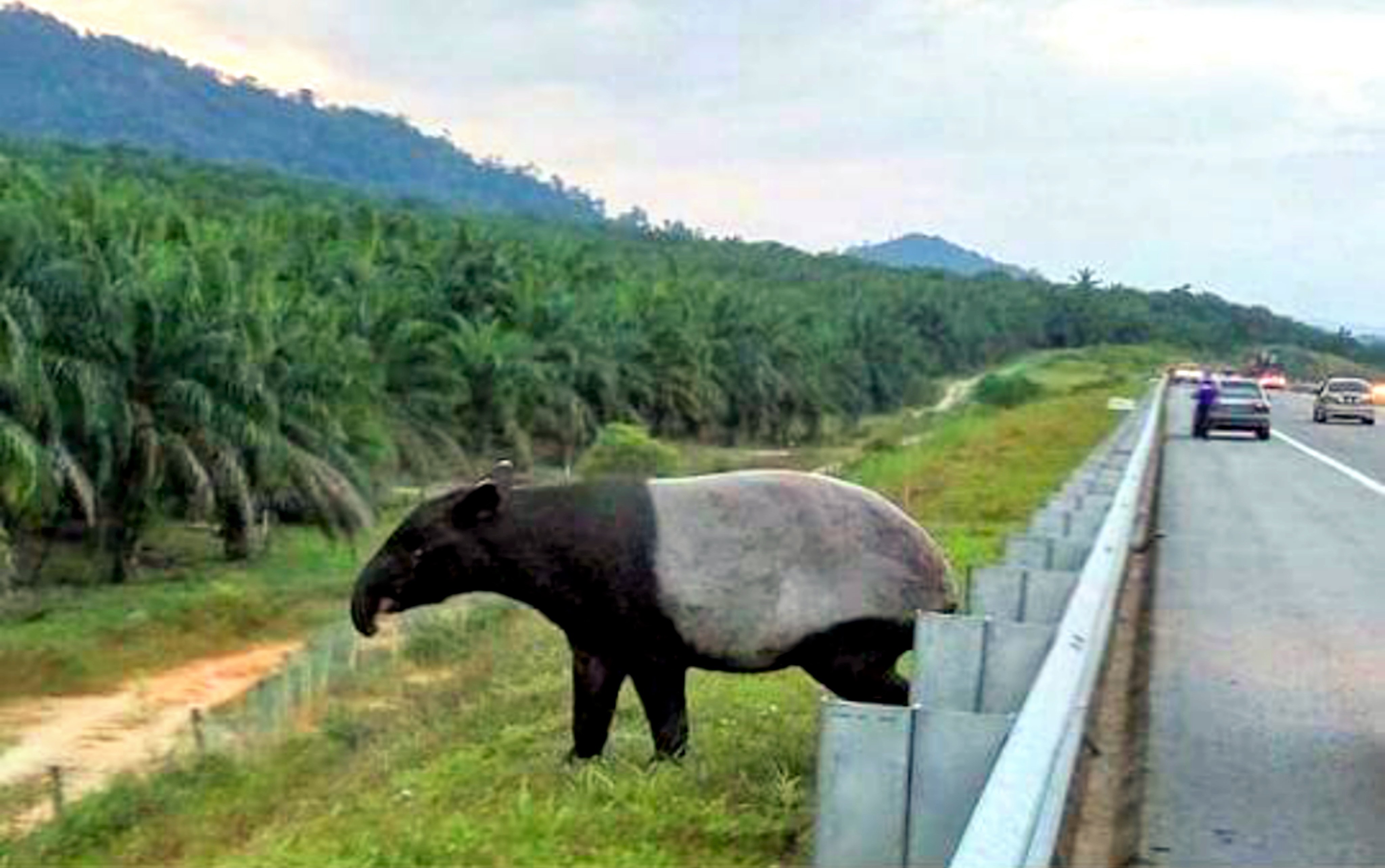 A few weeks ago, another tiger alleged sighting on the East Coast Expressway Phase 2 (LPT2), after cow and buffalo wandering around.

Now a tapir is said to appear on the RM4.1 billion highways.

Bernama reported, Director of the Department of Wildlife and National Parks (DWNP) Terengganu, Mohd Hasdi Husin said they received a report on the incident from the Malaysian Highway Authority (MHA) yesterday.

He said some claimed that these animals are in the exit Kijal, Kemaman and monitoring results have found there is a fence with holes that allow it to miss up to the road.

“We have already informed the matter to the MHA to take action with respect to mending fences. Before this, farm workers in nearby areas also often see tapirs roam the area,” he said.

On Saturday, a road user had recorded a tapir roam and run along the route LPT2 at about 7.30pm, and it becomes contagious in social media.

On February, last year, an adult tiger hit by a multi-purpose vehicle (MPV) at KM 321.2 on the same highway, succumbed to injuries, and died later.

The incident was believed to have occurred at about 1am as the tiger tried to cross the road before it was hit by the Kuala Terengganu-bound MPV from Kuala Lumpur.

A post-mortem on the tiger revealed that the tiger was pregnant.

State Wildlife and National Parks Department director Mohd Hasri Hussin said the post-mortem was held at the department’s office in Hulu Terengganu by its veterinary officer, at around noon.

“Two foetuses were found in the carcass during the post mortem. The tiger suffered serious internal injuries during the crash,” he said when contacted.

State Public Order and Traffic chief, Supt Kamaluddin Mohamad advised LPT 2 users to be cautious when driving along the highway especially at night, as it was common for wild animals to wander onto the road.

“Watch out for animals such as deer, tapir, wild boar as well as goats, cows and buffaloes which roam the area,” he said.

Yet, another tiger was seen last week walking on LPT2 and Mohd Hasdi said they still have not managed to catch it in a trap but has provided few specific locations.

On 30 Dec 2016, PLUS Malaysia Bhd, a manager of LPT2 said, the company has spent about RM5 million this year for repairs on fencing along the East Coast Expressway Phase 2 (LPT2).

PLUS chief operating officer Mohammad Fuad Khusairi said the fences were cut by residents in the surrounding areas to enable their livestock to wander or graze in the areas along the expressway.

“The grass at the LPT2 area is said to be of high quality so they let loose their livestock to graze in the middle of the highway.

“This is dangerous. I urge residents around LPT2 not to cut the fences as this will endanger motorists,” He said.

Continuous animals seen hovering on the highway until today prove that not grass and fence repair is not effective.

A long grass also found on other highways, across the country.

There are still many places alongside LPT2, the fence destroyed as revealed by Ir. Saiful Azmi from Kerteh.

It requires management LPT2 to inspect regularly and continuously to ensure the safety of users.