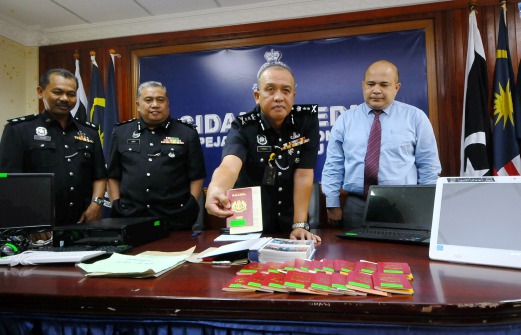 KUALA TERENGGANU – The Terengganu Education Department top management will be roped in to assist a probe into a supposed umrah package scam, which allegedly raked in a whopping RM14.2 million.

Police said state Education Department director Safruddin Ali Hussin and several department chiefs will be called to lend their assistance to the probe.

“We have arrested two men, both aged 28, on Monday. They are a company chief executive officer and an accountant. “We found and seized evidence which suggested proof of misconduct,” he told a press conference at the Kuala Terengganu police headquarters.

He said the company involved in the alleged scam, which started its operation in June this year, was identified as Yayasan Bakti Negara Terengganu (YBNT).

“The company had ofered teachers and their relatives in the state cheap umrah packages, priced at around RM3,000 per pilgrim,” he said, adding that police would apply to extend the remand order for both suspects under Section 420 of the Penal Code for cheating.

The two suspects have been remanded since Monday to assist the investigation.

It was reported that YBNT had admitted that it had failed to manage the pilgrimage of more than 2,000 teachers and their relatives.

However, YBNT denied that it had cheated 2,418 participants of the programme. It was later learnt that the postponement of their flights to Mecca was mainly due to the fact that YBNT had received the budget later than planned. – nst