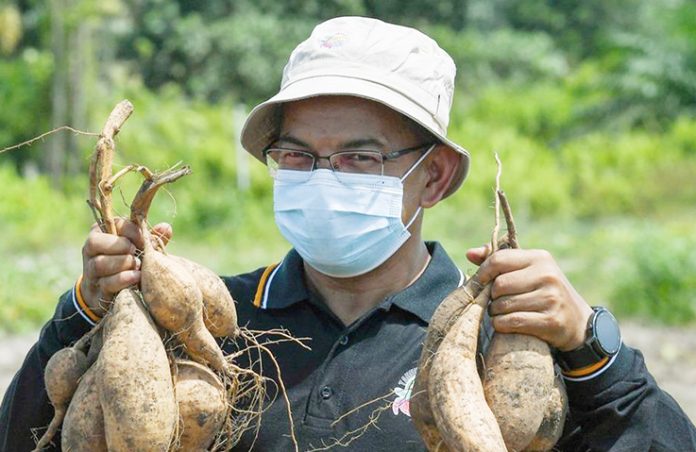 State Agriculture, Agro-based Industry and Rural Development Committee chairman Dr Azman Ibrahim said Setiu was chosen as there are still several commercial-scale agricultural land to be cultivated in the district, including government land or land gazetted for agricultural use under Section 62 of the National Land Code.

He said the move would increase the average income of farmers to RM3,00 per month and would see a 10 per cent contribution to the state’s gross domestic product (GDP) as well as generate 44,000 jobs.

“At present, there are 2,104 hectares of land that have been gazetted and reserved for agricultural chain either for livestock or crops.

“In addition, Setiu has 1,214 hectares of uncultivated lands due to various factors such as infrastructure constraints, landowners’ lack of capital and no technical knowledge in farming practices,” he told reporters after officiating the Vitato Potato Harvesting programme in Kampung Banggol here today.

In the meantime, he said Setiu is also known for various agricultural activities, including cash crops, livestock breeding, coastal fisheries, and commodity crops.

Following that, he said a Terengganu State Food Production Warehouse Action Committee was set up to prepare an action plan and identify lands that could be cultivated further in Setiu.

The 28-hectare land can produce 350 tonnes of vitato potatoes, with an estimated sales revenue of RM630,000.

“The market price stands at RM1.80 per kilogramme, and it is marketed in Terengganu as well as in the Klang Valley and northern states,” he said.

News Wartawan BO - 02/08/2021
The police must uncover the parties responsible for leaking a letter the Yang di-Pertuan Agong sent to the prime minister on Thursday regarding the...