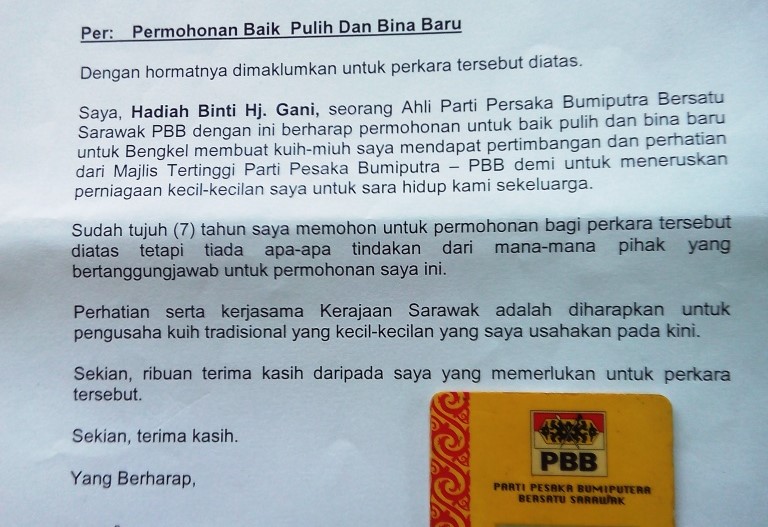 A small entrepreneurs apply for aid from the government in order to build business premises to help her and market its business.

Difficulties to apply for the workshop premises processed snacks and traditional cakes have caused Mrs Hadiah Binti Hj. Ghani, a member of Parti Bumiputera Bersatu (PBB) complained this problem to the PAS.

According to her, already seven years she waited her application to be approved, but so far no action has been taken by the parties concerned.

Had many times she applied to the relevant authorities to pay attention with the problem she faced but they did not pay attention either by her party as well as relevant agencies.

She is heavily dependent on small-scale sales revenue had complained this issue to the PAS to be able to voice the problem to the relevant authorities for consideration.

She is hoping the existence of workshop processing a light snack and traditional cakes that later can increase her household income and indirectly to generate income for small entrepreneurs like her.

We urge the Implementing Agency program that can solve the problem of Mrs Hadiah Hj. Ghani immediately and approve her application that has long been overdue.

The government should be able to help with due regard to whom urgently need help. PAS regardless of race, religion and political affiliation willing to help articulate the people’s problems to the relevant agencies so that their problems to be addressed accordingly.

In collaboration with the relevant government agencies to deliver assistance as requested it can be processed immediately is highly appreciated.