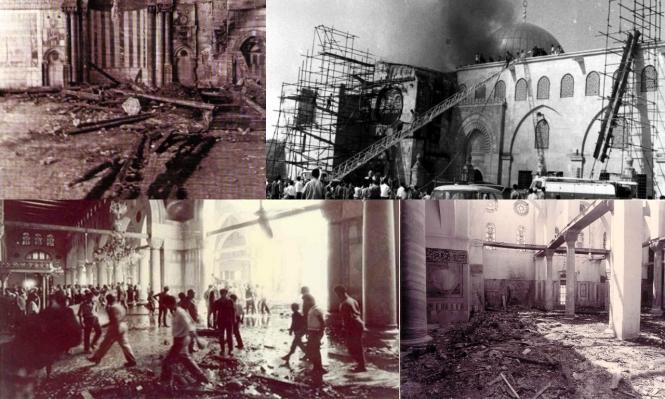 Fifty years have passed since the arson attack on al-Aqsa’s al-Qibli mosque that torn down a history engraved with ornament on the mosque’s walls, with flames sweeping through its pulpit, built up by Islamic Great Leader Nour al-Din al-Zenki and placed by Salah al-Din al-Ayyubi.

To this day, the flames are still engulfing the Palestinian, Islamic, and Arab identity of al-Aqsa Mosque.

The Palestinian residents of Jerusalem had managed 50 years ago to put out the flames that spread through al-Aqsa Mosque, yet the Israeli occupation continues to pursue its plans to judaize and desecrate the holy complex.

Half a century on the ill-fated date August 1, 1969, on which extremist Australian Zionist Dennis Michael Rohan torched al-Qibli mosque with Israeli occupation authorities being complicit in this crime, Israeli violations at al-Aqsa Mosque have escalated and taken a very dangerous path that the Israeli occupation has never dared to go through.

Israeli leaders have promised their people that rules followed when dealing with the status quo of al-Aqsa Mosque have been waived and that Jewish settlers have a right to break into al-Aqsa complex and “pray” inside it.

The Israeli presumptuousness came while some Arab regimes have extended their hands to normalise ties with the Israeli occupation.

This heinous crime will remain a witness to the daily Israeli violations against Islamic and Christian holy sites in occupied Jerusalem and a painful reminder for the forthcoming Palestinian generations throughout history.

On the 50th anniversary of the arson attack on al-Aqsa Mosque, we state the following:

First: The Islamic identity and sanctity of al-Aqsa Mosque is a part of the Muslims’ doctrine and a historical constant that will never be waived despite all Israeli attempts to impose a new reality at al-Aqsa complex and its surroundings.

Second: We salute the Palestinian residents of Jerusalem who defend al-Aqsa Mosque and fight off the Israeli plans to desecrate and judaize the sacred compound despite the Israeli policy of systematic displacement through home demolitions, arrests, land grabs, and restrictions.

Third: The option of resistance and upholding Palestinian rights and constant as part of a unified strategy is the only way to face off the Israeli occupation and its plans and projects targeting Jerusalem and al-Aqsa Mosque.

Fourth: The displacement of Palestinian Jerusalemites coupled with home demolitions, as in the case of Wadi al-Hummus, Isawiya village, Shufat refugee camp, is another chapter of Israeli efforts to judaize al-Aqsa Mosque and change the geographical and demographic features of Jerusalem.

Sixth: We urge the Organisation of Islamic Cooperation, which was founded in response to the 1969 arson attack against al-Aqsa Mosque, to take on its role in protecting al-Aqsa complex and supporting Jerusalem’s Palestinian residents.

Seventh: Hamas calls on all media outlets to assume their role in exposing the Israeli plans intended to judaize al-Aqsa Mosque and the Israeli claims aimed at obliterating the historical facts about the holy compound and shedding light on the importance of al-Aqsa Mosque for Muslims.