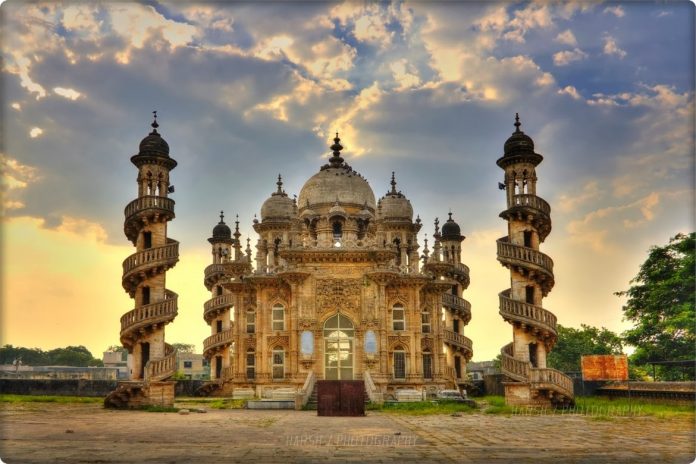 Exactly 600 years ago, four Ahmads stood by the side of the river Sabarmati with a rope in hand laying the foundation of the city of Ahmedabad. Presence of these four Ahmads was no accident; these were chosen after a vision by the newly-crowned Sultan of Gujarat Ahmad Shah I. According to his vision, the first planned city of medieval India was to be established by four persons named Ahmad who had not missed any of their obligatory prayers.

After a frantic search across Gujarat four Ahmads – Sultan Ahmad Shah I, Shaikh Ahmad Khattu of Sarkhez, Qazi Ahmad Jod of Patan, and scholar Malik Ahmad came together on 7 Zil Qa’da 813 ( 2-3 March 1411) to establish a city that has survived many ups and downs in its 600-year-old history.

But Muslim history of Gujarat does not begin with the establishment of Ahmedabad. In fact, Muslims were already in Gujarat for 600 years before Allauddin Khilji’s army appeared in this region in 1297. Just like Muslims arrival in Malabar in Kerala, as soon as Islam began spreading in Arabian Peninsula, Muslims began to make their presence felt in the coastal region of Gujarat.

The first Muslim foray into Gujarat appears to be in 15 hijri or the year 635 CE when governor of Bahrain sent an expedition to Thana and Bhaurch. The contact with Muslim continued for several centuries in the form of raid, trade, and migration.

After Sindh, it is Gujarat where the first Muslim rule was established in Indian sub-continent. Sanjan, a small town on the coast saw the establishment of an independent principality. Three rulers Fadl Ibn Mahan, Muhammad bin Fadl, and Mahan ibn Fadl ibn Mahan ruled successively from 813 CE to 841 CE. Sanjan, which was called Sandan by Arabs find references in travelogues of Arab writers as an important port and industrial town.

Jama Masjid established by the Mahan dynasty continued to function even after the end of dynasty. Local Hindu rulers allowed Muslim population to live, trade, and pray. But Sanjan was not the only Muslim inhabitation. Historigrapher Abul Hasan Ali Masudi reached Cambay in 915 CE and he saw a large number of Arab Muslim settled in Cambay, Chembur, Thana, Sopara, Sanjan, and Bharuch. He wrote that Muslim led honourable life under Hindu kings and they had built a number of mosques where regular prayers were offered.

A number of these mosques have survived, making Gujarat site of some of the oldest mosques of India. Sanjan still has a functioning jama masjid but its date cannot be confirmed. The oldest mosque in Gujarat is the Jama Masjid of Bharuch which was completed in the year 1065. Also in Bharuch is probably the oldest Islamic structure Madrasa Maulana Ishaq built in 1038 CE. Both buildings were constructed well before Muslim ruled Bharuch.

While riches of Gujarat attracted traders and migration, it also made an attractive target for Mahmood Ghaznavi who attacked the temple at Somnath in the year 1024. About 150 years later it was Shahabuddin Ghori who attacked Gujarat but failed twice and not until 1197 when his general Qutubuddin Aibak had some success in Gujarat.

The story of modern Gujarat doesn’t begin till we see the establishment of sovereign Sultanate of Gujarat by Muzaffar Shah I by declaring his independence in 1407. Four years later his grandson Ahmad Shah I, founder of Ahmedabad, becomes the Sultan and start giving shape to a region that we recognize as present day Gujarat.