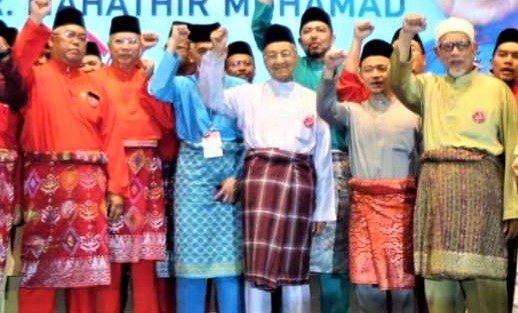 Sarawak PAS supports the statement of PAS President Tuan Guru Haji Abdul Hadi Awang said as if only the Malays only labeled a racist when it comes to the fate of their rights which was seen to be marginalized on its own land by the other party. The more real stressful situations make Malays speak out, as the case may be challenged.

God created a male and a female and made you into nations and tribes that ye may know one another.

In Sarawak, we respect one another in accordance with a culture of shared prosperity that has been intact since the people of Sarawak own the government of Sarawak.

PAS policy is Islam. Fighting for its existence in this country is a society and a government that embodies the values of Islamic life and its laws towards the will of God. Maintaining the purity of Islam and the independence and sovereignty of the nation.

Respecting the principles of the PAS struggle is also part of the commitment of one of the nation’s pillars of civility and morality.

This principle applies to all political entities, organizations, and parties. Why because Malays are Muslims, we are labeled as racist because the Malays expressed dissatisfaction with the lack of fate of the Malays themselves.

If the Malay is racist, since the beginning, the immigrants do not get citizenship, political rights for a Member of Parliament, the Menteri Besar or Chief Minister, in charge of economic, practice their religion freely, using the mother tongue in education so as to achieve the position as it existed.

What should be opposed are extremists of religion, politics, ideological organizations such as communist agendas and aggressive movements, the LTTE, and some extremists led by foreigners who want to overthrow the country’s leadership.

Racism is a belief system or doctrine that states that biological differences attached to the human race determine cultural achievement or individuals – that one race is superior and has the right to govern another race.

Immigrants living in Malaysia are fortunate because they are free to practice their religious activities and their culture without hindrance. If in other countries they are not treated like in Malaysia. Indigenous peoples in Sarawak are friendly and accept anyone who comes to the state and the less talked about racial issues because they understand the culture and customs of their respective religions. This problem arises when there are extremists who like to trigger this problem.

So remember! Islam teaches that the patience of the Malays has a limit boundaries. Only the Malays are a too stupid and weak spirit of Islam and the lost souls of his people only insensitive, so lost identity on their own land. “As said PAS President Tuan Guru.