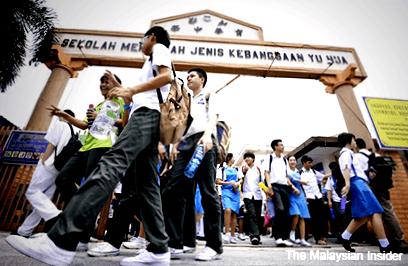 Vernacular schools refer to schools that use their mother tongue in the implementation of teaching and learning (T&L) in schools. There are three types of vernacular schools, namely Malay, Chinese, and Tamil. Malay vernacular schools, which was first established in 1855, namely Bayan Lepas, Penang. Malay School Gelugor, Penang use of the Malay language as the language of instruction.

Vernacular schools in the country exist due to the availability of mother tongue education.

All races in Malaysia since time immemorial using the Malay language as the official language.

In Sarawak, for example, if vernacular schools are established based on ethnicity, it is certain that society in this country will find it difficult to unite the various races by using the national language.

If the country believes in this mother tongue education to celebrate various races, the government should actually support all the same education for other ethnic groups in Malaysia. Meaning, we should have 30 to 40 national type schools (SJK). Therefore, if anyone thinks the Constitution is discriminatory, isn’t the issue of vernacular schools also part of discrimination against other races or ethnicities.

Because of these different education systems, there are gaps between races. The difference is not only in terms of the language of instruction, but also there are differences between the Malay school syllabus, English, Chinese, and Tamil schools. This clearly shows that the education system in the pre-independence era played a role in maintaining the personality of one ethnic group as well as creating two educated groups. This is the actual discrimination that can break the racial unity in this country.

We urge the government to empower the national language to be used for all national type schools in conjunction with this year’s National Day celebrations. Vernacular schools should use the Malay language as the language of instruction other than the native language can still be used and studied by all people to strengthen unity among the various races in the country. The government must unequivocally that the Malay language as the national language must be used for all types of existing national schools in the country and other native languages can still continue to use.

Racial unity in this country must be maintained, but we must not be divided because of the issue of vernacular schools that only care about their mother tongue to the point of setting aside the national language.

Actually, there is no problem to learn various languages in this country but the important thing is that the national language should be given priority. When we can learn these various languages, it can also help us to communicate with different races easily and well.