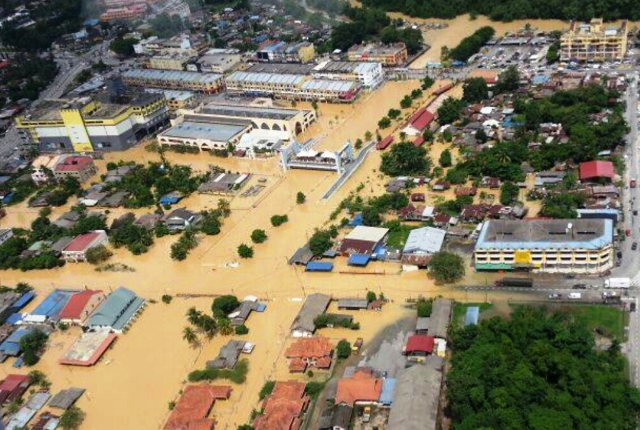 Malaysian authorities have evacuated tens of thousands people in four states, as flash floods sparked by heavy rains killed at least one person and swamped houses, schools and government offices.

Sporadic floods are common in parts of Malaysia during the annual monsoon, in part due to poor drainage systems and a lack of suitable infrastructure to cope with heavier-than-usual rainfall. In 2009 flash floods even paralyzed parts of Kuala Lumpur, submerging dozens of cars in the capital city.

Evacuation centers in Pahang, Terengganu, Johor and Kelantan states have taken in more than 56,000 people since Dec. 1, according to the state authorities.

Pahang, the home state of Prime Minister Najib Razak, has been the worst-affected, with over 34,000 evacuated. One person has drowned and another two are still missing, a Pahang police spokesman told the Wall Street Journal.

The rural state of Kelantan, in the country’s east, is the latest to be hit by floods. Nearly 800 people there have been moved to safety, according to the state government’s website on Friday.

With incessant rain showing little sign of abating in Kelantan, rescue officials say they expect the number of evacuees to rise. The state has stocked about 1.2 million Malaysian ringgit (around $372,000) worth of essential items, such as food and clothes for the flood victims, and thousands of government employees have been mobilized ahead of the flood, according to the website.

“Flood water hasn’t reached dangerous levels in many areas, and it seems we have been spared from the worst so far, but we’re on high alert for any possibility,” said Ahmad Fadhli Shaari, press secretary for the chief minister of Kelantan, Ahmad Yakob.

While rains in Kelantan and Pahang looked likely to continue, by Friday, floods had begun to recede in the southern state of Johor and in Terengganu in the east, allowing more than 6,000 evacuees to return to their homes.

Heavy rains began last month and are expected to persist until March as northeasterly winds continued to blow across the South China Sea to the east coast of peninsular Malaysia.

In the coming months the affected states could expect four to five bouts of widespread, heavy rains that could last for up to a week, the Malaysian Meteorological Department said.

“Although the country is expected to experience a normal northeast monsoon, each occurrence of heavy rainfall can cause flooding, especially at the river basins,” it added.

Malaysia escapes many of the other natural furies, such as volcanic eruptions and earthquakes, that regularly rattle regional neighbors Indonesia and the Philippines.

But flash floods cause their share of damage. While the latest damage estimates are not yet available, the government pegs the cost of destruction from annual floods at 1 billion Malaysian ringgit.- WSJ Blog