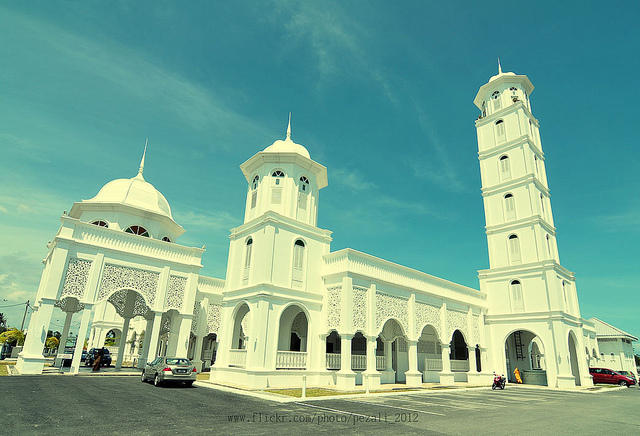 New masjids to be built in Terengganu need not be huge but must be equipped with air-conditioning for the comfort of congregators, said the new Menteri Besar of Terengganu, Dato’ Ahmad Razif Abdul Rahman.

Well, at last after years and years criticizing the Umno led state government of Terengganu for building huge and costly masjids even in rural areas, it takes a new menteri besar to rectify and correct the situation.

During the tenure of previous Umno menteris besar up to the era of Dato’ Seri Ahmad Said, new huge and sparkling masjids were built in Terengganu like there was no tomorrow. A new masjid in a small Malay village could easily cost between RM3 to RM5 million.

Ahmad Razif said such a transformation needed to be made in the building of masjids in the state as experience showed that those built in the past were huge and not economical since during compulsory prayers only one or two front rows of the masjids would be filled with congregators.

Building smaller masjids would be economical including easier in its management but the menteri besar was of the opinion that during celebrations such as to perform Aidilfitri and Aidiladha prayers, areas around the masjids could be converted into prayer compounds where tents or canopies could be erected.

After staying for three days in the ‘turtle state’ while holidaying with my family recently, I totally agree with Ahmad Razif’s ‘transformational ideas’ about the building of new masjids in the state. I spent some time at a relative’s house in a ‘kampung’, north of Kuala Terengganu; to be exact in Setiu, giving me ample time to have a look at some of the masjids and the movement of congregators there.

The house I stayed in was near a masjid, so for ‘solat fardu’ (compulsory prayers), I tried my best to perform it in the masjid. To my surprise at every occasion, only a handful of old men were at the huge sparkling new masjid. Even the first row was not filled during prayers except when groups of outsiders in buses and cars made a stop at the masjid.

Then during journeys in the state, I found out that the other masjids too attracted very few congregators during mass prayers for compulsory ‘solat’ such as ‘zuhur’ (afternoon) and ‘isyak’ (late evening) prayers. Even when performing ‘solat Jumaat’ (Friday prayers) in Masjid Al-Muktafi Billah Shah, I realized the masjid was not even half full when the ‘azan’ (call for prayers) was on air. Only after the arrival of several UiTM buses carrying hundreds of students was the situation ‘saved’.

Many masjids in Terengganu are huge and new even though they are located in rural areas. So I wasn’t shocked when newspapers not long ago carried stories from the State Assembly sittings that masjids in Terengganu failed to attract Muslims especially the youth other than the weekly Friday prayers.

It was reported that the attendance at masjids especially in rural areas was very poor even though the state government had built more than 100 masjids with several hundred millions of ringgit in allocations.

The state government was reported to have realized the situation and had taken various steps to rectify it such as introducing Qur’an learning sessions in masjids and setting up tuition classes there.

The Terengganu government too had built a crystal masjid and 21 replica masjids costing millions of ringgit on an island (Pulau Wan Man) called ‘Taman Tamadun Islam (TTI)’ (Islamic Civilization Edutainment Park) at the estuary of the Terengganu River to project itself as being concerned about ‘religious’ matters. One can witness the glittering masjids when driving along the Sultan Mahmud Bridge in Kuala Terengganu.

In my opinion the Terengganu government should ‘muhasabah’ (re-evaluate) itself as to why the people shy away from masjids. It is a pity and strange sight indeed when only a handful of veteran citizens come to pray in the many big and beautiful masjids in the state. Only a handful of old timers are seen at masjids, so where have the youth of Terengganu gone to?

Talking about Ahmad Razif’s ‘transformation program’ to build smaller masjids in Terengganu in the future, do please allow me to present ‘my two sen worth’ idea based on what I had witnessed during my visits to several masjids in India, Pakistan, Iran and the former Soviet Republics in Central Asia (such as Uzbekistan and Krgyszstan).

Some of the masjids in this part of the world have small structures in front but they have a very large courtyard behind the main building usually used as the main prayer hall. If the main building could house say 1,000 worshipers; perhaps its courtyard could take some 10,000 people.

Large courtyards were synonymous with masjids here. Large number of attendees could fill in the masjids especially during Friday prayers or during celebrations such as Aidilfitri and Aidiladha.

In India, one of the biggest and most magnificent masjids there, the Jama Masjid which was built by Mughal Emperor Shah Jahan in 1650 in Delhi, has a very large courtyard paved with red stone. In the centre of the courtyard is a large marble tank in which the devout wash (take ablution) before attending prayers.

Thousands and thousands of worshipers can pray in the courtyard; thus masjids would not have problems in accommodating a large number of congregators during special occasions.

Perhaps we could duplicate their ways when building our masjid. Why not build our masjid with a small building in front and have a large courtyard behind it.

By doing this, it would be more economical and easier to manage our masjid. We could even have it fully air-conditioned; footing its electricity bill should not be a problem compared to having a huge masjid which is almost empty at all times except perhaps during Fridays, Aidilfitri and Aidiladha prayers.

Some might argue that our climate which is wet for almost part of the year would be an hindrance in having large courtyards for congregators during special occasions, but as suggested by Ahmad Razif we could have tents and canopies ready at hand to face such circumstances.-malaysia-chronicle