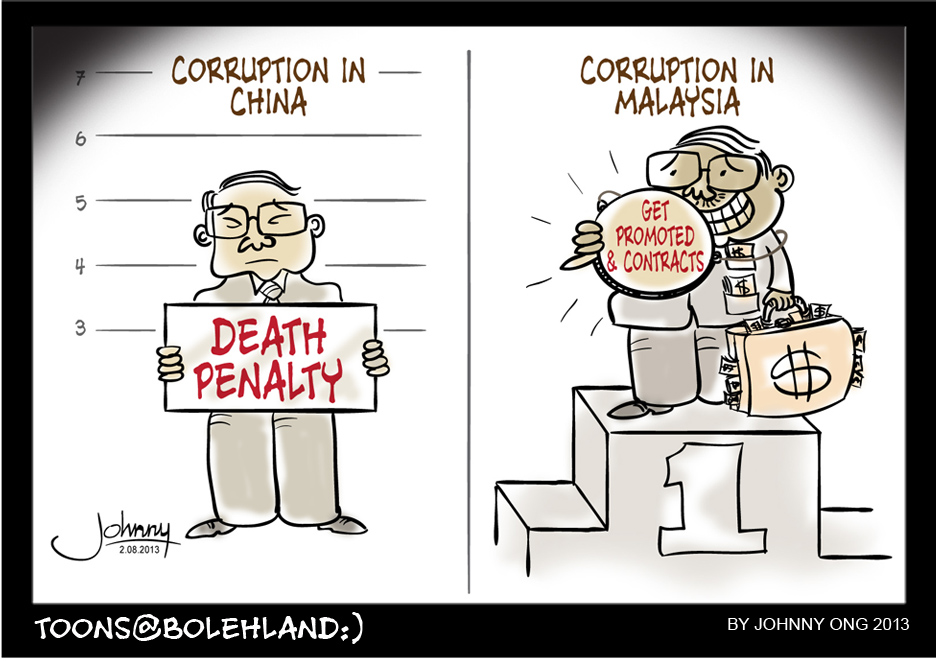 Most Malaysians immediately think of “corruption” the moment they are asked to talk about their government, while “profit” comes to mind when thinking about corporations, an international survey has revealed.

In the Corporate Perception Indicator 2014 survey jointly carried out by CNBC and Burson-Marsteller,1,076 Malaysians were asked the open-ended question of “What is the first thing that comes to the mind when you think of the government?”.

The resulting answer from both Malaysia’s 1,001 general public and the 75 executives polled was “corruption”, which was also the most popular word in most of the 25 countries surveyed.

This puts Malaysia in the company of the India, US, Brazil, Mexico, Columbia, UK, Spain and South Africa, while only the general public in neighbouring Indonesia, China, South Korea, Canada, Russia, UAE immediately linked “government” to “corruption”.

In a similar open-ended question on corporations, the top answer for the 1,076 Malaysian respondents was “profit” – a word similarly shared by most Asians polled including those in Indonesia, India, Japan and executives in Singapore, Hong Kong, South Korea.

Malaysians polled in the survey also felt that small businesses were profit-driven.

The general public in Malaysia trusted the government the most to steer the local economy at 33 per cent, while executives here placed their trust in corporations instead at 31 per cent.

Most Malaysians also believed that the most important role for corporations is to strengthen the economy, with 44 per cent polled saying businesses had “just the right amount” of influence over the economy as opposed to firms wielding “too much” influence at 29 per cent.

A high number or 59 per cent of Malaysians polled said it was good for corporations to be influential as this would help drive economic growth, with a whopping 70 per cent pointing to businesses as a “source of hope” for them.

Out of all 25 countries, the Malaysians showed the strongest preference for multinationals at 43 per cent, while 37 per cent said it did not matter to them, with both those supporting domestic companies and who did not indicate a preference standing equally at 10 per cent.

Malaysians polled also believe the news media to be the most socially responsible industry, with many saying that firms should direct their corporate social responsibility efforts towards social welfare.

Malaysians picked heads of government out of 10 professions as both the most powerful and most respected people in society.

The Corporate Perception Indicator 2014 survey was jointly carried out by CNBC and Burson-Marsteller through online questionnaires answered by over 25,000 people between June 28 and August 15 this year.

The margins of error for the sample size in Malaysia of 1,001 members of the public and 75 high-ranking executives at companies employing more than 50 people are 3.10 per cent and 11.32 per cent respectively.-themalaymailonline