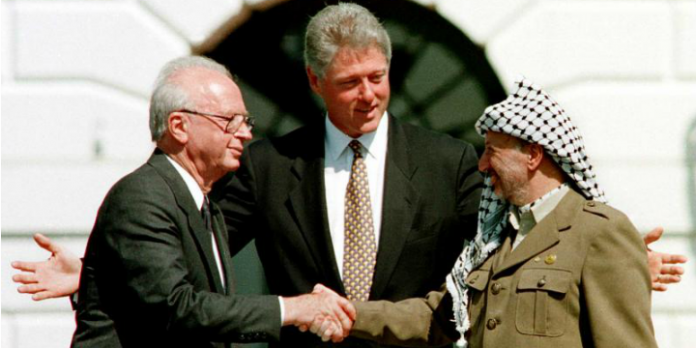 On this day 26 years ago, ill-fated Oslo Accords were signed in the dark and behind the Palestinian people’s back. This political and catastrophic setback, reached with no national consensus over it, granted the Israeli occupation 78% of Palestine, whereas the Palestinian people were not given the right to the remaining territories, which were left for making compromises, with superpowers siding with the Israeli occupation and enabling it to impose its conditions taking advantage of the postponement of major issues, such as Jerusalem, Palestine refugees, borders, security, waters, and Palestinian detainees.

Twenty-six years on the signing of the Oslo Accords, the Palestinian people are still paying a price for this political ordeal and national crime, which left tragic repercussions on the Palestinian rights more than the Balfour Declaration did. The Israeli occupation was not compelled to halt settlement construction and expansion. Rather, settlement activity was doubled as the Israeli occupation was freed from any restrictions banning it from changing the geopolitical status in the occupied West Bank and Jerusalem, so it continued judaization and displacement plans.

Israeli attempts to annex Jerusalem and large parts of the West Bank, abolish the Palestinians’ right of return, and draw up borders in the context of leaked articles of the “deal of the century” came as a result of settlement and judaization efforts, while the Palestinian people were given hallow promises through negotiations and agreements.

The Oslo Accords has divided the Palestinian people politically and geographically and established an illusionary authority, whose role is to protect the occupation. On the other hand, the Israeli occupation has strengthened the role of Coordinator government in the West Bank, thanks to security coordination efforts.

In light of the abovementioned, Hamas states the following:

First: Hamas lauds the Palestinian people in Jerusalem, the West Bank, Gaza, and the 1948 occupied territories, as well as in the diaspora for standing steadfast in the face of the Israeli occupation and sticking to their rights and fight against the occupation.

Second: The resistance movement rejects the “deal of the century” along with all proposed regional solutions aimed at liquidating or undermining the Palestinian national rights.

Third: Hamas calls for achieving national unity by enforcing the 2011 Cairo Agreement and the 2017 Beirut Deal and by forming a national unity government.

Fourth: Hamas endorses the Great Return March and Breaking the Siege in Gaza, calling for holding similar popular and peaceful protests in the West Bank, while highlighting full support for he peaceful, popular demonstrations east of Gaza.

Sixth: Hamas reiterates that it will stick to the option of resistance with all means, above all the armed resistance, calling on the PA to end political arrests against Palestinians.

Seventh: We call for an end to the shameful security coordination with the Israeli occupation and all agreements signed with it, including the Paris Protocol.