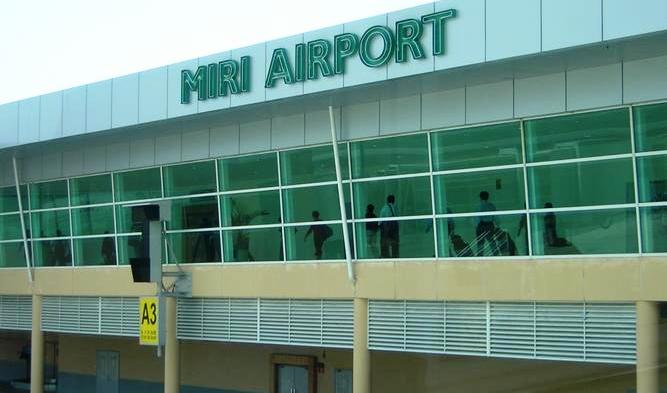 Among the main problems faced by the public in Miri airport is limited parking lot, particularly at peak hours. Some are forced to park their cars on the roadside due to the car park is full. Most of those who park their cars in a long period of time, especially among workers at the airport and besides that there are also a number of passengers who leave their cars in the area, particularly day trips and will take their car back on the same day or the next day. By leave their vehicles here it is easier and safer with just a little bit of charge.

We hope that the relevant authorities can add more parking lots for the public to park their vehicles at the place accordingly, so as to avoid traffic congestion within the area of Miri airport.

Besides that the terminal building at the ticket counter check-in is also no seats available for the convenience of passengers waiting their turn to check-in. There used to be a seat for a passenger to sit there while waiting but now it was gone. Hope this problem can be overcome by adding more seating so that the public are more comfortable, while waiting and queue at the check-in counters.

Among other issues the authorities need to take note of is Miri city airport, it should be upgraded to international airport to cater for the increasing number of passengers in the northern region of Sarawak. The tourism industry in the region will significantly benefit through the International direct flights that is more time saving and costs among foreign tourists. Plans and an additional allocation for building expansion of Miri airport also needed to accommodate large aircraft and budget airline such as AirAsia and Malindo Airlines.

The Malindo Airlines that should resume its low-cost services to Miri until now have yet to see any progress. They should reschedule travel time to Miri because Miri is the second largest city in Sarawak. Miri serves as a main Malaysia’s petroleum industry and the resort city that should get the attention of the authorities. Miri is also the main tourist gateway to Loagan Bunut National Park, Lambir National Park, Niah Caves and Mount Mulu. Miri is also known for its exotic coral reef. Due to its strategic location close to Brunei Darussalam, Miri is the perfect place for those who wish to embark on a journey into the richest oil country in Southeast Asian.

In addition, many expatriates, foreign workers and those who come from abroad working and came to Miri city. This is the best time for low-cost airlines and MAS airlines take the opportunity to attract tourists from abroad and domestic come to Miri city directly. This indirectly, saves the cost of passenger spending without having to transit in other international airports to get to their destinations more quickly and economically.

We hope that the management of Malaysian Airlines System Berhad and also low-cost airlines will review the timetable for passengers departing from Miri continue their destinations without having much transit that takes too long to get to the destination.

An example of AirAsia has started direct flights from Miri to Manila, Philippines, this is certainly a good development to reduce time and passenger travel costs to visit foreign countries. The airline should expand its destinations to other Asian countries such as Indonesia, China and Australia and other destinations that are deemed necessary.

Compared with the present, passengers from Miri had to fly via Kuala Lumpur International Airport or neighboring countries to leave the country and will certainly involve higher cost and large capital outlays to reach their destinations.

The cost of air travel to Kuala Lumpur can be saved by direct flights from Miri without having to transit to Kuala Lumpur or neighboring countries, and it takes a shorter time and flight costs can be reduced. This problem can be overcome if the authorities take seriously the demands of the public who wish to visit abroad as well as foreign tourists to come directly to Miri as one of the tourist destinations in the state.

It’s been raised many times but so far no action has been taken from the parties concerned to improve the quality of direct flights from Miri airport go abroad and the ministry of tourism also did not take any initiative to attract foreign tourists to the resort city of Miri. Residents of Miri hope Miri airport would be upgraded as an international tourist destination.

We urge the authorities to review the flight schedule and can improve the flight services to attract more tourists to the state through Miri. This in turn could increase the country’s income besides introducing Sarawak as one of the tourist destinations in Southeast Asia.