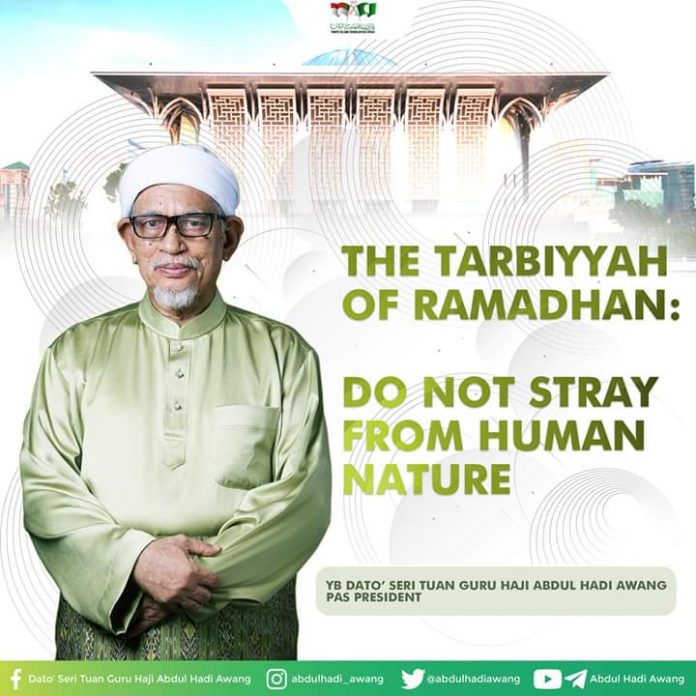 Ramadhan and worships are intended to nurture the believers to build their character according to their true innate disposition, in contrast to the creation of angels, animals, plants and rocks.

Human beings have body, spirit and mind, in addition to living in a family, a society and a nation. Therefore, they live with the purpose of worshipping and governing the world according to the vision of the hereafter, and it is not just for the purpose of eating to strengthen their appetite without any vision of life.

Man has his own role because of the nature of his creation which is different from that of other beings. Allah said:

“Did ye then think that We had created you in jest, and that ye would not be brought back to Us (for account)?” (Surah al-Mu’minun: 115)

Selecting the best alternatives is the essence of life of all beings, especially for men to protect the pillars of life; safeguarding religion, life, intellect, dignity and wealth.

Human beings with sound mind will strive towards goodness and to help one another as a civilized society according to the level and necessity unless in a state of emergency.

Animals also have their own instincts, such as their preference in choosing delicious, safe and nutritious foods as well as a comfortable and safe place for themselves and their groups. Although they are lacking in intellect, animals do not consume food that is intoxicating or deadly by using their senses to see, smell and feel in order to make judgment. Similarly, animals build nests in a safe place for themselves, their youngs and their flocks.

Plants grow at certain types of soils and temperatures according to its characteristics and require fertilizers for continuous fertility development.

However, there are people who do not try to reap the benefit from Allah’s grace for themselves. Allah said:

“The parable of those who reject faith is as if one were to shout like a goat-herd, to things that listen to nothing but calls and cries; deaf, dumb, and blind. They are void of wisdom.” (Surah al-Baqarah: 171)

“Many are the Jinns and men We have made for Hell: they have hearts wherewith they understand not, eyes wherewith they see not, and ears wherewith they hear not. They are like cattle nay more misguided: for they are heedless (of warning).” (Surah al-A’raf: 179)

“And We had firmly established them in a (prosperity and) power which We have not given to you (ye Quraish!) and We had endowed them with (faculties of) hearing, seeing, heart and intellect: but of no profit to them were their (faculties of) hearing, sight, and heart and intellect, when they went on rejecting the Signs of Allah; and they were (completely) encircled by that which they used to mock at!” (Surah al-Ahqaf: 26)

Indeed there are humans who become pests and are even worse than animals who steal good fruits. They take the approach of seeking someone else’s fault or mistake to bring them down and humiliate them.

What is even worse is that there are people who are too ignorant to seek the truth, instead only looking for evil and mischief to the extent that they shut their eyes from seeing any positive things. They look at negative things that come up and find every weakness to worsen the situation rather than offering constructive criticism as a mean of advise and correction.

Today, using the most sophisticated media, they have chosen every piece of information based on a theory from the West whereby the end justify the means that become their guidance and their pride. They are capable of making thing worse than it already is.

Islam teaches us to see every good thing from all sides whether it is from a friend or a foe. We should give advice for every offense and save as many people as possible without coercing them to embrace Islam. Next, we also have to be fair even to the enemy and do not be extreme even to the intruder.

“Fight in the cause of Allah those who fight you but do not transgress limits; for Allah loveth not transgressors.” (Surah al-Baqarah: 190)

“O ye who believe! stand out firmly for Allah, as witnesses to fair dealing, and let not the hatred of others to you make you swerve to wrong and depart from justice. Be just: that is next to Piety: and fear Allah For Allah is well-acquainted with all that ye do.” (Surah al-Maidah: 8)

“Invite (all) to the way of thy Lord with wisdom and beautiful preaching; and argue with them in ways that are best and most gracious: for thy Lord knoweth, best who have strayed from His Path, and who receive guidance. (125) And if ye do catch them out, catch them out no worse than they catch you out: but if ye show patience, that is indeed the best (course) for those who are patient. (126) And do thou be patient, for thy patience is but from Allah; nor grieve over them: and distress not thyself because of their plots. (127) For Allah is with those who restrain themselves and those who do good (128).” (Surah al-Nahl: 125-128)

The obligation to fast during the month of Ramadan is intended to build the essence of piety which would be evident in worship and life in community.