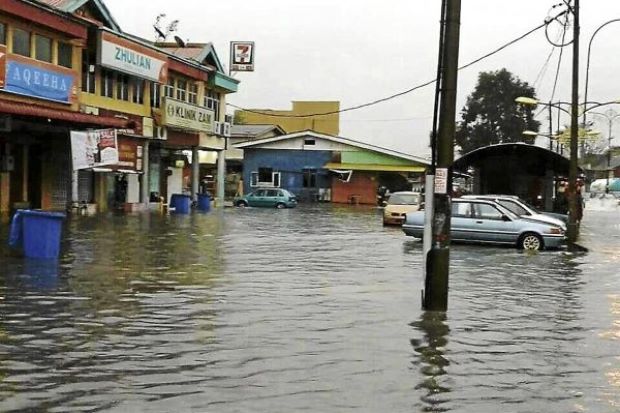 The flood situation in Johor and Kelantan continued to improve with the number of evacuees at relief centres dropping, but the situation in Terengganu has not.

According to the National Security Council portal, 41 flood relief centres made up of 37 in Kemaman, three in Dungun and one in Marang were still operating.

The Drainage and Irrigation Department reported that the water level in most main rivers in Terengganu was at the alert level.

The flood situation in Kuala Terengganu.

The Public Works Department reported that the 8th kilometre of the Kuala Terengganu-Kuantan road, near a polytechnic and Bukit Bauk, Dungun, was inundated by flood waters and closed to light vehicles following heavy rain last night.

In Kemaman, the main road from Paka to Kertih was closed to traffic after it had been inundated by flood waters up to one metre high following heavy rain.

Council assistant secretary (Information) Ahmad Redza Arshad said heavy rain since 2am around Dungun had caused flooding in some areas.

“Water from Bukit Bauk flowed down fast, causing the Paka-Kertih main road at Durian Mentangau to be flooded and impassable to all traffic,” he added.

Ahmad Redza said some areas in Marang and Hulu Terengganu were also inundated by flood waters up to a half-metre high, adding that residents were advised to be on the alert.

The Chukai-Air Putih road was flooded and Jalan Sungai Pinang leading to Kampung Sungai Pinang, near Kemaman town, was passable only to heavy vehicles.