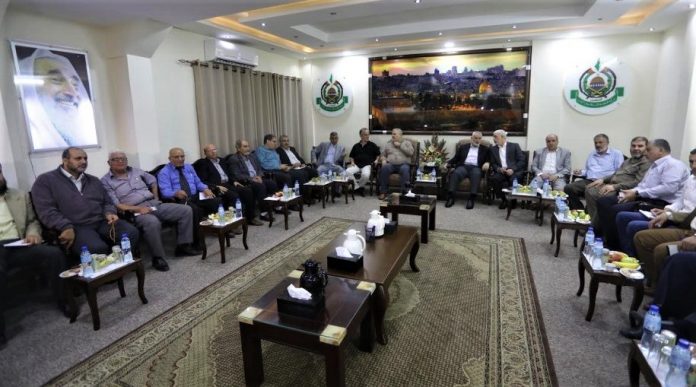 The Head of the Hamas Political Bureau said on Sunday evening that nothing should be regarded as an obstacle to holding Palestinian elections. Ismail Haniyeh made his comment in a speech at the end of a meeting with the Palestinian factions in Gaza.

Haniyeh said that his movement would accept any conditions set by the Palestinian Authority, Fatah and PLO President Mahmoud Abbas ahead of the elections. However, he stressed that the elections must be held according to a national agreement signed by all of the factions, and must include Palestinian voters in occupied Jerusalem.

The Hamas leader added that the movement seeks to end the Palestinian division and build a political system based on partnership.

Hailing the factions which participated in the discussions, Haniyeh highlighted the fact that Hamas has handled the issue of elections with flexibility and a degree of national responsibility. “Elections are the base for the Palestinian national project and a way out of the dilemma which the Palestinian cause is going through now,” he stressed.

The Hamas official also mentioned that the national position shared by all the Palestinian factions is that legislative, presidential and national council elections should be held simultaneously. “However, we agreed to hold the legislative elections followed by presidential elections within a specific timeframe.”

Hamas, he pointed out, has made this concession because Fatah insisted upon it.

The factions have made some demands of the Palestinian Authority, added Haniyeh. These are: “Holding the elections in the West Bank, Jerusalem and the Gaza Strip, neutralisation of the constitutional court formed by Abbas [and] sorting out the issue of the current parliament.”