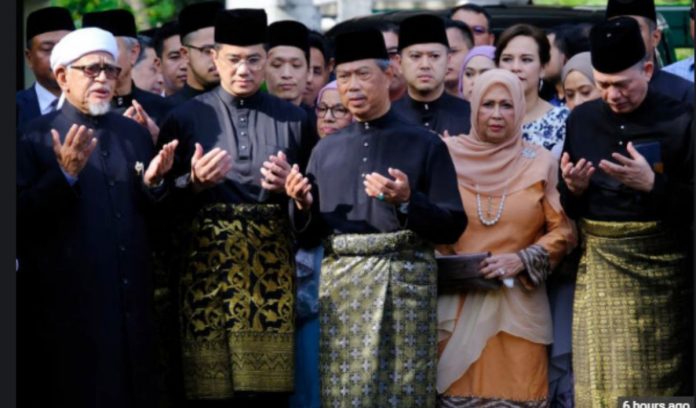 Muhyiddin Yassin was sworn in as Malaysia’s prime minister on Sunday, an hour after his predecessor and former ally, Mahathir Mohamad, claimed he was the one with enough support to form a government and would prove it with a vote in Parliament.

“I am telling the public that I have the majority support,” Mahathir told journalists in a live-streamed news conference. “I have the 114.”

The 94-year-old veteran Mahathir said he had proof of the support in the form of statutory declarations and letters, and called for an urgent sitting of Parliament.

Mahathir was flanked by politicians from the Pakatan Harapan coalition, which won power in May 2018 but has been dogged by political infighting that came to a head last weekend when a splinter group tried to form an alliance with the opposition.

The move led to Mahathir’s resignation and days of uncertainty that the king, a constitutional monarch, had sought to resolve by meeting each member of Parliament individually.

On Saturday, the palace announced that Muhyiddin, 72, had the confidence of Parliament and would be sworn in as prime minister on Sunday.

The announcement sparked anger among some Malaysians who felt their democratic rights as voters were being undermined.

Muhyiddin was driven into the palace in Kuala Lumpur at 9.50am (01:50 GMT) ahead of the oath-taking ceremony, having cobbled together a coalition with the opposition United Malays National Organisation (UMNO), and PAS, Malaysia’s Islamic party, with support from the main political party in the Borneo territory of Sarawak.

Members of his new coalition were also at the palace, sharing pictures of themselves on social media, before Muhyiddin took the oath to become the country’s eighth prime minister at 10.30am (02:30 GMT).

Mahathir said he felt betrayed by Muhyiddin, a veteran politician who was home minister under the previous Pakatan Harapan government.

“We are going to see a man who does not have majority support become prime minister,” he said.

Hasan Jafri, a political analyst based in Singapore, said the situation remained uncertain.

“Until there is a parliament sitting and a vote of confidence, you don’t know how strong a government it is,” Hasan said. “With the vote of confidence you can see which of the coalitions commands the majority. It’s so close.”

There are 222 seats in Malaysia’s lower house.

Muhyiddin was deputy prime minister under Najib Razak until he was sacked in 2015, amid a multibillion-dollar corruption scandal at state fund 1MDB.

He left UMNO and, after battling pancreatic cancer, joined forces with Mahathir, who helped the multi-ethnic Pakatan Harapan coalition to victory in the May 2018 election amid widespread disgust over corruption.

Najib, who remains an MP and in UMNO, is now on trial over wrongdoing at 1MDB, while several other senior UMNO politicians are also facing corruption charges. The 2018 election was the first time the party had lost power since independence.