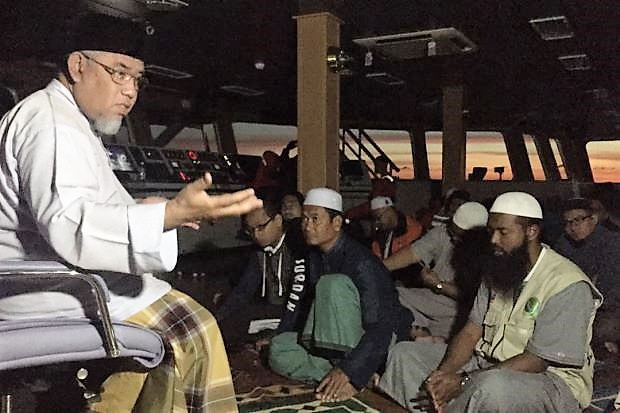 In the darkness and out across the waves, a man’s voice called.

“Allahuakbar!” he said over the microphone as the sound of the azan is heard from the loud speakers on the aid ship Nautical Aliya.

It was about 5.40am Thailand time, and the Muslim call to prayers.

Men dressed in robes (jubah) got out of the rooms and made their way to the bridge.

There, little lights blinked on the console panels in front of the captain’s seat, and screens have brightly colored pixels on them, one showing the ship’s position on the radar, another the depth of the sea below.

Nearby, a lamp’s bulb shone onto a table bearing charts and maps of the region, the sea in shades of blue according to their depth, the land in yellow.

Its glow was wrapped in a curtain, creating a small section on the bridge, leaving the rest of the deck shrouded in darkness.

Lights from a flood lamp raised on a stand were pointed at dozens of prayer mats.

The room started to fill up quickly. Soon some 50 people had lined themselves facing west towards Mecca.

And they prayed in the darkness, with light from the flood lamp illuminating their figures.

It was Tuesday Feb 7, and the Nautical Aliya was on its way to Myanmar and Bangladesh, bearing 2,300 tonnes of aid for Rohingyas in the two countries.

The aid ship was carrying 185 volunteers from 12 countries, many of whom Muslims.

Rohingyas are Muslim, and thousands have fled on boats in the last two years, fearing violence in Myanmar’s Rakhine State.

At the time, the nearest large island was nearly 200km to the east, in Thailand. And another 400km to the west were the Andaman Islands.

An unknown number – perhaps hundreds – have died in the same seas that the ship now crosses.

After prayers, Mohd Azmi Abdul Hamid, 59, one of the ship’s chief organisers, sat on a chair facing the rest and spoke.

“In Islam, differences are something to be celebrated. You can be different, but not disunited,” he said, switching between English and Malay.

He said the ummah – referring to Muslims all over the world – who came from different races, languages and cultures was today divided.

The issue, he said, was how to respect these differences.

Then he adjusted his spectacles, peering into the figures before him, shrouded in the darkness. “Moussa? Are you here, brother?” he asked.

Moussa Yacoub, 39, a French volunteer of Cameroonian descent laughed as he sat in the front row and said, “Yes.”

“I can’t see you,” Azmi said, before adding with a smile: “Differences.”

He told those present: “Where can you find the qualities of Islam today? In Japan, in Denmark, in the most modern countries in the world today, in the non-Muslim countries.”

“Our issue is how do we save our brothers in Rakhine, in Mindanao, in Xinjiang? You can’t do anything because you are divided!” he said.

Then, Azmi looked behind him, at a wall near the ship’s port windows where 1,000 copies of the Quran were wrapped in yellow plastic bags.

These would be given to Rohingya children in the camps near Teknaf, Bangladesh, where thousands of refugees from Myanmar are believed to reside.

When met later, Azmi said the prayers would be held three times a day, in the morning, afternoon and the last at night.

Anyone, he said, could lead the ship’s prayers over the public address system, and that the mission’s organisers would schedule for people to lead the prayers.

The prayers on the ship continued until the sun started to rise, painting the sky orange, yellow and blue.

“This mission gives us a chance to unite everyone. We will arrive at the same destination,” Azmi said with a smile.

A few hours later, a press conference on the ship was held.

Bangladesh, a country of over 145 million Muslims, nearly 87% of the population, had responded by still not allowing the ship to dock at the Teknaf port.

The government, however, gave the ship an alternative – the cargo can be offloaded at the islands of Kutubdia and Saint Martin’s or at the Chittagong port.

It also would not allow the volunteers on the ship to visit the Rohingya camps.

The ship continued to sail towards Yangon, Myanmar’s capital. And in the afternoon the prayer mats were shifted a little to the left, always facing Mecca – thestar.