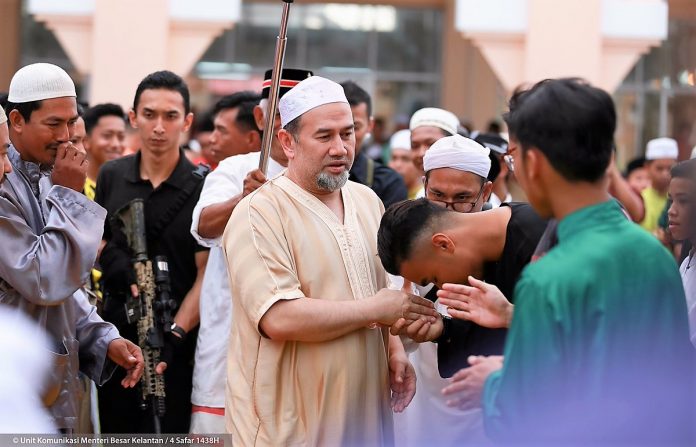 SULTAN Muhammad V has won the hearts and minds of the rakyat with his humble and gentle ways.

When His Majesty chats with the people during visits, he often refers to himself as “ambo” (Kelantan dialect for I).

His down-to-earth dressing style has also gone down well with the public. He is often photographed wearing a jubah or Baju Melayu with sarong and a skullcap when he meets his subjects in his home state of Kelantan.

The King is also seen as a pious leader as he has shown a great commitment to religious matters. An example is His Majesty’s brainchild of “Qiam With Me” Ramadan month programme. The programme, first launched six years ago, is a hit among Muslims in Kelantan.

His Royal Highness also mooted the idea of holding the annual Royal Walkathon to promote a healthy lifestyle and to draw the community closer to the palace.

The people of Kelantan were in a jovial mood when their beloved Sultan was appointed the 15th Yang di-Pertuan Agong last December.

Sultan Muhammad V, born Tengku Muhammad Faris Petra, was the second monarch from the state to be installed as the Yang di-Pertuan Agong.

Sultan Muhammad was appointed Crown Prince at the age of 16, and as the Regent of Kelantan before his 40th birthday. He was proclaimed as the 29th Sultan of Kelantan in 2010.

Sultan Muhammad V places great emphasis on education, as he believes in travelling far and wide to enrich his knowledge.

He continued his secondary education at Alice Smith International School in Kuala Lumpur before leaving to study at Oakham School in Rutland in England until 1989.

Sultan Muhammad V is now the Chancellor of National Defence University of Malaysia and Universiti Teknologi Mara. As His Majesty places great emphasis on education, he religiously attends convocation ceremonies held at the two institutions.

As His Majesty is also the Supreme Commander of the Malaysian Armed Forces, and Colonel-in-chief of the Royal Artillery Regiment, he has shown deep interest in organisations associated with security and the military.

Yayasan Sultan Kelantan provides education aid as well as monetary assistance to the less privileged, including orphans, the disabled and the poor.