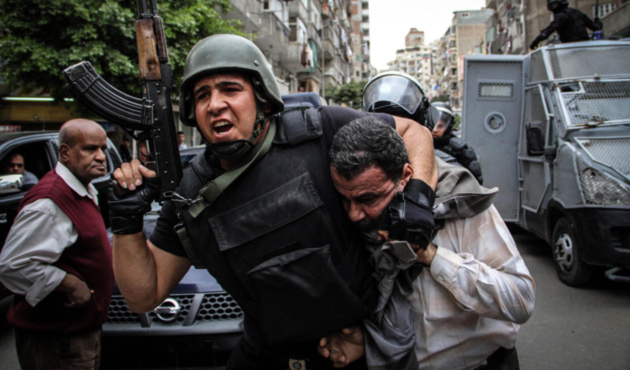 The Egyptian Coordination Committee for Rights and Freedoms documented during the week of February 17-23 more than 40 human rights violations in Egypt, ranging from 37 cases of arbitrary detention or forcible disappearances, two cases of medical negligence, beside other violations inside prisons.

19 enforced disappearances cases are from the Governorate of Sharqia, 9 in Giza, and 6 in Damietta, the rest are from other cities across Egypt .

The Committee confirmed that the military coup authorities continue the crimes of deliberate medical negligence of detainees in detention centers, in clear violation of international and domestic laws.

Article 18 of the Egyptian Constitution provides that “everyone has the right to access integrated health care in accordance with quality standards without excluding prisoners from it.” However, the security apparatus ignores that and does not comply.

The ‘Freedom of Thought and Expression Foundation’ has reaffirmed its rejection of any form of authority censorship imposed on freedom of expression, press freedom聽 and the internet freedom of access that aims to control the public sphere.

The Foundation said in its latest report, titled: “Closing the Windows .. Internet Censorship in Egypt,” that the high number of blocked websites in Egypt shows the government’s determination to control the news circulating on the Internet.

The Foundation pointed out that controlling the opposition sites began in May 2017 by issuing number of laws that seek to close the public domain and control the various platforms of freedom expression: newspapers, satellite channels, and various digital platforms.

Blocking at least 497 websites has had a negative impact on the overall digital journalism industry in Egypt, and the future of its investments under the current economic crises, and created an unsuitable working environment for journalists and media professionals, that affect most of press and media institutions.

In addition to the economic losses and the press crises, the Foundation stated that by this prohibition, the government violates the articles of the Egyptian Constitution, as well as article 19 of the Universal Declaration of Human Rights and article 19 of the International Covenant on Civil and Political Rights.

The Foundation for Freedom of Thought and Expression called on the government and telecommunications companies in Egypt to lift the ban on all websites, and disclose the authority that issued this decision, and its legal basis.

Noteworthy, in May and June of 2017, the military coup government in Egypt blocked more than 60 opposition websites, including news websites, freelance blogs, television websites, and online digital newspapers.

On September 5, 2017, the number of blocked websites had risen to 424, after blocking the website of the ‘Egyptian Commission for Rights and Freedoms’ and the website of ‘Reporters Without Borders’.