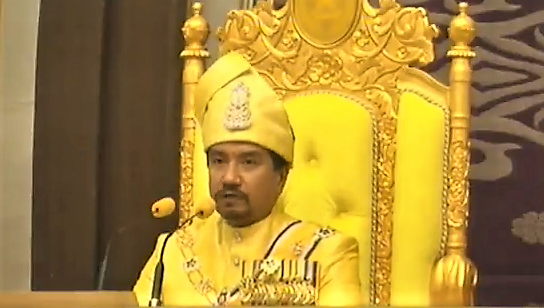 The Sultan of Terengganu, Sultan Mizan Zainal Abidin, wants the state government to draw up and implement effective and comprehensive strategies to revive the state’s economy that has been affected by the Covid-19 pandemic.

He said he hoped the state’s budget for the coming years would focus on the state’s economic growth and recovery.

“Development projects need to be planned carefully to ensure the sustainability of economic growth and long-term needs.

“All expenditures made on a one-off basis should be reviewed based on the current financial position and commitment of the state government,” he said when opening the fourth term of the 14th state assembly at Wisma Darul Iman here today.

The text of Sultan Mizan’s speech was read out by menteri besar Ahmad Samsuri Mokhtar.

Sultan Mizan said the state government should also pay serious attention to efforts to develop the agricultural sector to a higher level and hoped that programmes and incentives for farmers, livestock breeders and fishermen could be continued with improvements.

He said the state government should also continue to help small and medium-sized enterprises (SMEs) like providing them with financial support and business premises facilities so that they could continue to do business.

“The SME is among the sectors affected by the movement control orders. Many night market and farmers’ market traders, restaurant operators and others have lost their source of income, many are forced to close business and have lost their jobs,” he said.

He advised the state government, with the collaboration of various state and federal government agencies, to attract new investments.

Sultan Mizan said he hoped the management of the Covid-19 vaccination in Terengganu could be intensified so that the state could achieve herd immunity by the end of the year, or before the northeast monsoon season hits the state.

“I also hope that stricter action is taken to ensure that SOPs set by the National Security Council and the health ministry are complied with so that the spread of new cases can be overcome in an open economic sector,” he added.