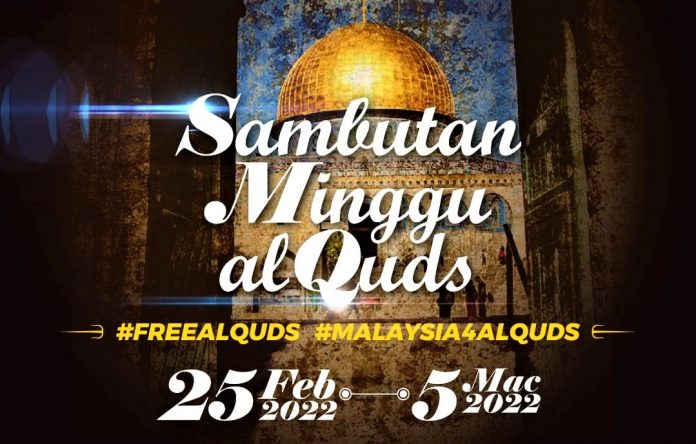 ALQUDS GLOBAL WEEK: AID4PALESTINE, IN COLLABORATION WITH THE SPECIAL ENVOY OF PRIME MINISTER TO MIDDLE EAST OFFICE, REINSTATE COMMITMENT TOWARDS LIBERATING ALQUDS AND STRENGTHENING SOLIDARITY WITH THE OCCUPIED PALESTINE.

1. In conjunction with Al-Quds Global Week, which will take place on 25 February – 5 March 2022 (23 Rajab – 1 Shaaban 1433H), AID4PALESTINE, in collaboration with The Special Envoy Of Prime Minister To Middle East Office to the Middle East, took the responsibility to spearhead its organization in Malaysia with the involvement of government and private agencies, NGOs, community leaders and various levels of society.

2. Al-Quds Global Week, which is held simultaneously around the world, is a large high-impact initiative, sparked by a coalition of Islamic scholars’ associations from various countries to raise the solidarity of the ummah around the world, including our beloved Malaysia, to stand together with awareness, understanding, and action on the liberation of Al-Quds and Pa.lestine that has been occupied and looted by the I.sraeli regime.

3. The issue of Al-Quds and Pa.lestine is not a local issue for the Palestinians, nor is it a regional issue for the Arabs. In fact, it is a universal humanitarian issue that must be fought for by all independent human beings, regardless of race and religion. For Muslims, this issue is more important because it touches on the issue of the holy land, which cannot be compromised. In this holy land, the Al-Aqsa Mosque, which is one of the stops of Israk and Mikraj, is located. Allah s.w.t said:
سُبْحَانَ الَّذِي أَسْرَىٰ بِعَبْدِهِ لَيْلًا مِّنَ الْمَسْجِدِ الْحَرَامِ إِلَى الْمَسْجِدِ الْأَقْصَى الَّذِي بَارَكْنَا حَوْلَهُ لِنُرِيَهُ مِنْ آيَاتِنَا ۚ إِنَّهُ هُوَ السَّمِيعُ الْبَصِيرُ
Meaning: “Glory be to the One Who took His servant Muḥammad by night from the Sacred Mosque to the Farthest Mosque whose surroundings We have blessed, so that We may show him some of Our signs. Indeed, He alone is the All-Hearing, All-Seeing.” [al-Isra’: 1]

4. The selection of the last week of Rajab, which is in conjunction with the sacred date of the liberation of Bayt al-Maqdis by Salahuddin al-Ayyubi, who was known for his steadfastness against the enemies of Islam, to organize the Al-Quds Global Week every year, reaffirms the stand of the ummah to oppose the normalization of relations against the Israeli regime, who remains arrogant and continues to oppress the Pa.lestinians and violates the sanctity of the land of Al-Quds barbarically. Such actions have, in fact, long been forbidden by Allah s.w.t :
يَا أَيُّهَا الَّذِينَ آمَنُوا لَا تَتَّخِذُوا عَدُوِّي وَعَدُوَّكُمْ أَوْلِيَاءَ تُلْقُونَ إِلَيْهِم بِالْمَوَدَّةِ وَقَدْ كَفَرُوا بِمَا جَاءَكُم مِّنَ الْحَقِّ…
Meaning: “O believers! Do not take My enemies and yours as trusted allies, showing them affection even though they deny what has come to you of the truth. They drove the Messenger and yourselves out of Mecca, simply for your belief in Allah, your Lord. If you truly emigrated to struggle in My cause and seek My pleasure, then do not take them as allies, disclosing secrets of the believers to the pagans out of affection for them, when I know best whatever you conceal and whatever you reveal. And whoever of you does this has truly strayed from the Right Way.” [al-Mumtahanah: 1]

6. In this regard, AID4PALESTINE and The Special Envoy Of Prime Minister To Middle East Office are pleased to invite all Malaysians to join us, strengthen the solidarity of Al-Quds with our brothers and sisters in Pa.lestine, and be involved in making this Al-Quds Global Week a success Insha’Allah.
“Malaysia For Al-Quds”