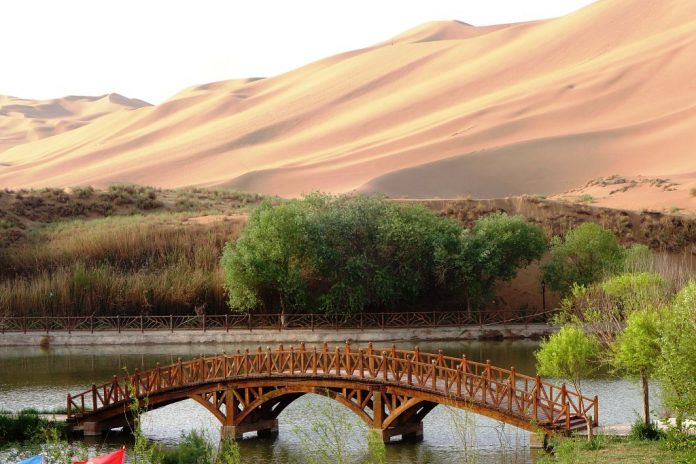 The Kumutage Desert and Gurbantunggut Desert, two scenic areas in Northwest China’s Xinjiang Uygur Autonomous Region, have been listed as the country’s most beautiful deserts, xjdaily.com reported on Thursday.

According to the report, a national conference on forestry tourism promotion was held recently by the forestry authority in Nantong, Jiangsu Province. Among the 42 tourist destinations selected for nomination, nine were enlisted as the most beautiful deserts.

The Kumutage Desert Scenic Area, which became a national park in 2002, is in the southern part of Shanshan county, Turpan City of Xinjiang.

It is one of the few deserts in the world that lies close to an urban area, taking only ten minutes to drive from Shanshan to the scenic area.

It is a scenic spot integrating desert tourism, sand sports, as well as scientific research. As of September 2019, nearly 1.12 million visitors have traveled to the desert, a year-on-year increase of 25.95 percent.

The other enlisted national desert park is located at the southwestern rim of Gurbantunggut Desert in the center of Xinjiang’s Junggar Basin. The desert is the second largest in China with an area of 48,800 square kilometers and is also home to oases, forming a unique natural and man-made landscape.

The park is both a primitive, rough, barren and borderless world, host to a natural botanical garden with a total of 149 species of desert plants.

It is the largest desert-themed eco-tourism scenic spot in northern Xinjiang. To date, the scenic spot has launched more than 20 entertainment activities including hot air balloon rides and hiking adventures.