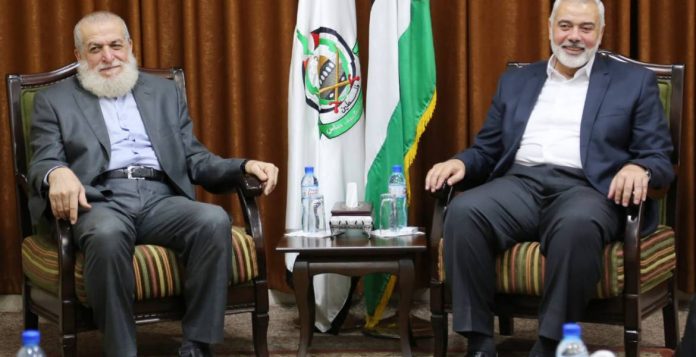 Hamas and Palestinian Islamic Jihad held a high-profile meeting in the Gaza Strip to address political developments relating to land grab, the illegal annexation, and settlement expansion by the Israeli occupation or concerning the status quo in Jerusalem and the West Bank, in general, and the suffering of Palestinian detainees in Israeli jails, as well as the ongoing, unfair Israeli siege on Gaza.

The resistance movements restated their full support for popular and national actions in the occupied West Bank, Jerusalem, and the 1948 occupied territories to protect Palestinian territories from colonial annexation plans, calling on all Palestinians to take part in popular activities against colonialism and terrorism.

Meanwhile, both movements have lauded the national vision adopted by Palestinian factions in the Gaza Strip and agreed to embrace it and fulfil its goals.

The summit addressed the situation in occupied Jerusalem as the Israeli occupation is suppressing national and Islamic figures who are trying to repulse judaisation projects and unabated raids into the al-Aqsa Mosque by Israeli occupation forces and settlers. The two movements reaffirmed their support for Palestinian Jerusalemites and saluted Palestinian defenders of al-Aqsa Mosque.

They hailed Sheikh Ikrima Sabri along with Waqf officials for defending the al-Aqsa Mosque and Jerusalem.

The two resistance groups also saluted Palestinian residents of the 1948 occupied territories, especially in occupied Yaffa (Jaffa), who are facing off Israeli plots to judaise the Arab sites and ancient cemeteries and falsify historical facts about the occupied city.

As for Gaza’s humanitarian situation, aggravated by the 14-year Israeli siege, the two Palestinian movements called for not subjecting the issues related to Palestinian lives to any disputes reiterating the necessity to protect the Palestinian home front and foil any attempt aimed at the Palestinian people, particularly as the Israeli occupation is seeking to pass its plans by isolating Gaza and annexing the occupied West Bank.

Regarding the bilateral relations between both movements, Hamas and Islamic Jihad highlighted the importance of their relationship at all levels and agreed to boost joint collaboration, coordination and work at all scales in a way that embraces the option of resistance against the occupation.