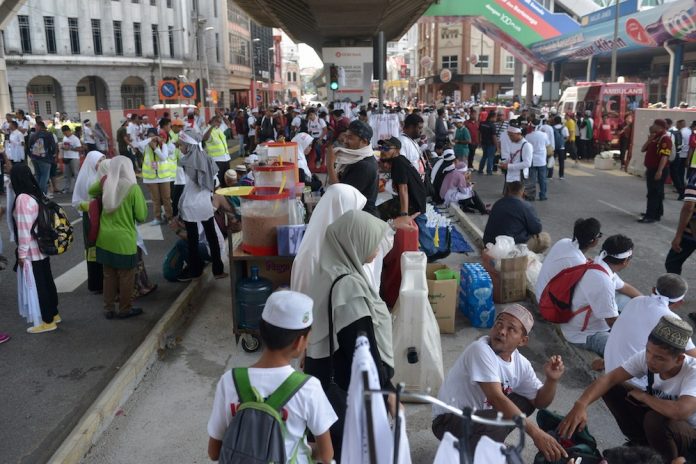 Many participants at a rally here against the International Convention on the Elimination of All Forms of Racial Discrimination (ICERD) were satisfied with the protest.

Hailing from as far as Terengganu to Melaka, demonstrators aged from eight to 80 all felt their objectives in coming to the city centre to protest against the United Nations convention had been achieved with the overwhelming turnout of tens of thousands.

For 48-year-old Idris Muhamad, who hails from Melaka, bringing his entire extended family was important to make sure they were aware of the challenges being faced by the Malay and Muslim community.

“We want to uphold Islam as the official religion of Malaysia, and our presence here is a warning to all not to challenge that.

“I was very surprised to see the turnout, I didn’t expect so many to turn up, but their presence only makes me more enthusiastic to fight for our cause,” he told Malay Mail.

Idris, who arrived in the city around 10am, will be taking the bus back to Melaka tonight, all on his own cost.

“We had to pay for ourselves about RM30 per person for the bus ride here,” he said, while denying that he had been compensated by organisers to show up.

Another parent here, 45-year-old Zaharuddin Mohamad, said it was important to teach his children patriotism from young, justifying why he brought his eight-year-old son and two teenage daughters aged 14 and 15 to the gathering.

Zaharuddin, a Sungai Buloh PAS division member, admitted he was aware minors were not allowed at public assemblies, but said the intention of the gathering should be prioritised above such legal considerations.

“We are here peacefully and with or without children, the lesson of patriotism is there for them to learn, so I don’t see a problem with me bringing them as long as I am supervising,” he said.

Another outstation visitor and parent was Mohd Fazil Abdullah, also the PAS’ Indera Makhota information chief, who claims to have attended every major rally since the first Bersih protest that fought for free and fair elections under the Barisan Nasional (BN) government.

He said missing another huge demonstration was considered a big no-no, hence why his wife and 10-year-old son tagged along this time.

“I’ve taken my son to rallies in the East Coast before, but this is the first time I am taking him to a mega rally in Kuala Lumpur.

“In a way, this is a little vacation for him and my wife,” said Mohd Fazil, a Pahang native.

“There’s no need for ICERD in Malaysia. The current system is fairer than ICERD. All races live in peace, everyone has their fair share,” he added when asked about the intentions of the rally.

The graphic designer said he had also arranged for a bus for his party members to attend the rally, while mobilising at least 50 people’s journeys into the city from his hometown in Chendor, who arrived in Kuala Lumpur at around 5am.

Even those from the north did not let the distance stand in their way, as office clerk Khairul Abdullah, 25, took a five-hour bus ride from Kuala Terengganu to the city just to be part of the mega rally.

“I came here with a group of about 50 people, all who are against the ICERD,” he said.

Khairul expressed awe at the number of people who showed up, far from his initial expectations of several thousand people.

“The numbers here itself is a signal to the government not to touch the Federal Constitution when it concerns the Malay Muslims,” he said.

Today’s demonstration in the capital city was organised by Malay-Muslim groups, PAS, and Umno, even though the Pakatan Harapan government has said it will not ratify ICERD. – malaymail