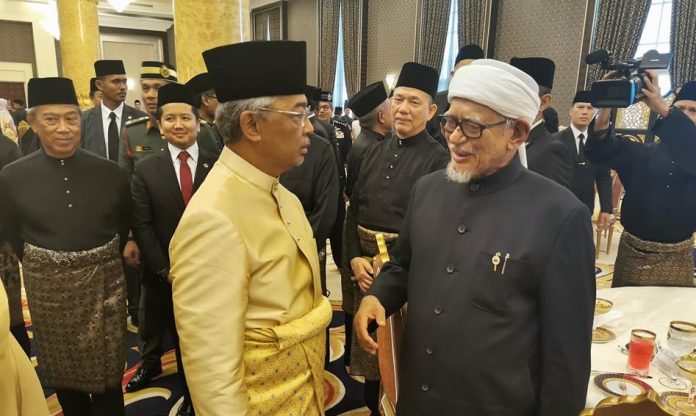 The wellsprings of the defeat of Malaysia’s reform coalition led by Prime Minister Mahathir Mohamad, which was unceremoniously shunted from power over the past two weeks, were laid in the 20 months the alliance was in power, when it turned out there was little or no reform beyond taking revenge on the thoroughly corrupt leaders of the United Malays National Organization and no intention of carrying out the reforms the coalition described in its pre-election manifesto.

The attempted putsch that resulted in Mahathir’s resignation, continued political infighting, the ensuing breakup of both Parti Keadilan Rakyat (PKR), and Parti Pribumi Bersatu Malaysia (PPBM) and a scramble by both to show the king they have the numbers to command a majority in the parliament meant a realignment of the government was inevitable although Muhyiddin, the leader of the new Perikatan Nasional coalition, has delayed a meeting of parliament, expected March 9, for two months. Critics say he has delayed the sitting to consolidate forces he doesn’t now have.

The Pakatan Harapan coalition backflipped on the ratification of both the International Convention on the Elimination of All Forms of Racial Discrimination (ICERD) and the treaty that established the International Criminal Court. It failed to eliminate race quotas on education, allowed the organization of a so-called Malay Dignity Congress which ruffled racial sensitivities, maintained Ketuanan Melayu – Malays first — rhetoric, and allowed the arrest of members of the Democratic Action on suspect terrorism allegations concerning a long-defunct Sri Lankan organization, The Liberation Tigers of Tamil Eelam. At Mahathir’s insistence, the government refused to extradite Islamic firebrand Zakir Naik back to India, where he was wanted on several charges.

The leadership succession squabble between Mahathir and PKR President Anwar Ibrahim, complicated by the defection PKR rival Mohamed Azmin Ali to Mahathir’s side, disrupted the job of governance. The perceived arrogance of government members including the DAP head Lim Guan Eng, the finance minister, helped lead the PH coalition into a number of by-election defeats, culminating in the Tanjung Plai by-election in Johor, where the PH candidate was defeated by more than 15,000 votes, the worst defeat of a government candidate in modern history.

After Mahathir had set the forces in motion to realign the government along Malay supremacy lines and then backed out over bringing UMNO into the insurgent coalition, Muhyiddin, the president of the party Mahathir established to lead the Pakatan Harapan coalition, knew the coalition had come to the end of its life. When the opportunity arose, he assembled the members of Bersatu loyal to him, with UMNO, Parti Islam Se-Malaysia (PAS), nominal members from both the Malaysian Indian Congress (MIC), and Malaysian Chinese Association (MCA), the Sabah Heritage Party (WARISAN), with support from Sarawak’s Gabungan Parti Sarawak (GPS).

These events have shown that Malaysia is controlled by an interconnected Malay elite. The new government is simply a rearrangement of the same people who have exercised power for decades. When these Malay elites land themselves into trouble by not being able to sort out leadership, they appeal to the highest of Malay elite, the king. Neither the people nor the parliament had any influence over the matter.

It remains to be seen how the new coalition is going to handle the prosecution of former Prime Minister Najib Razak, whose overwhelming corruption played a major role in costing the Barisan Nasional its majority in the May 2018 election. He currently is on trial on allegations of looting the 1Malaysia Development Bhd. Sovereign wealth fund of US$4.6 billion, the biggest scandal in the country’s history, and faces many other allegations, as does Ahmad Zahid Hamidi, the deputy prime minister, who faces 45 charges involving the theft of the equivalent of US$27 million from a government program. It was amnesty for them that led to Mahathir’s refusal to allow UMNO into the realigned racial coalition.

The bulk of Muhyiddin’s Bersatu loyalists are ex-stalwarts from UMNO and should have very little problem re-integrating with the UMNO psyche. The UMNO-PAS relationship will be much more interesting. Although both UMNO and PAS share a common Ketuanan Melayu perspective, UMNO ministers have tended to be much more pragmatic within their ministries than ideological. This may differ greatly from PAS, which has a definite Islamic agenda to fulfil. It’s likely MCA Tanjung Plai MP Wee Jeck Seng and MIC Tapah MP Saravanan s/o Murugan may become the symbolic non-Malay ministers within the prime minister’s department, so the PN coalition can claim they are not a Malay only government.

There is also no doubt there will be a couple of Warisan ministers within the cabinet. Ministries and jobs are important for Sabah politicians. It’s still not certain whether GPS will take up any cabinet positions or stay as an independent supporter of the federal government. GPS is more concerned about maintaining non-interference in Sarawak by the federal government rather than participating in any federal administration.

The remnants of the PH governing coalition are in tatters. Mahathir has about five loyal MPs left in Bersatu. PKR lost 11 with Azmin Ali’s defection to Bersatu. DAP and Amanah are primarily intact, although the DAP has suffered a couple of strategic defections at the state level, costing it the Melaka state government. Support from Sabah and Sarawak is down to the small number of constituencies DAP and PKR hold in East Malaysia. A large number of PKR and Amanah constituencies are in danger of falling to the PN government, should a general election be called. Mahathir’s Langkawi constituency is not safe, nor are those of his loyalists.

The events of last week highlighted Anwar Ibrahim’s weaknesses. First, he has lost the gift of being able to bring politicians together the way he was able to assemble both the Pakatan Rakyat and later PH coalitions. Secondly, he blundered strategically by not throwing his support behind Mahathir in the early stages of the attempted putsch. A show of strength for Mahathir might have staved off Muhyiddin’s final move. Anwar’s electoral popularity is more myth than reality. It was Mahathir who brough PH across the line in GE 14 in May 2018.

The DAP has suffered too by its MPs being silent, with reformers including Tony Pua unaccountably mute. This will keep coming back to haunt them on the hustings. The arrogance of Lim Guan Eng and the like did the party damage. However, any electoral retaliation against the DAP is unlikely to lose them any constituencies, due to the large majorities in the malapportioned constituencies they hold.

Muhyiddin’s Perikatan Nasional coalition was very fragile on the day he was shown in as prime minister, hence the day in convening parliament. Over the weeks and months ahead, his parliamentary numbers should be bolstered a little with some defections. The 71-year-old leader’s biggest early challenge is to assemble a cabinet and ministry that both satisfy the parties and factions who supported him and at the same time presents a competent lineup. To achieve this, Muhyiddin may have to enlarge the ministry once again to accommodate. How Muhyiddin constructs his cabinet will be very telling on his government’s future directions.

Narratives under a Muhyiddin administration shouldn’t change too much from what the country has been hearing over the years of Barisan Nasional government. The prime powerbase of the new coalition is the Malay heartlands, and this will be important. The abolition of the goods and services tax by PH had major fiscal implications, reducing the ability to enhance social welfare programs. Under PH many were cut. Muhyiddin may reintroduce the GST at a reduced rate to fund social welfare programs back into the Malay heartlands. This would be electorally popular.

Under PH, education policy was hijacked by former education minister Maszlee Malik who insisted on introducing pseudo-Islamic gestures to please his peers. PN may undertake some real reform in the education sector, and here it will be very interesting who is appointed as minister and whether the ministry will be broken up once again into two ministries.

In Malaysia, a federal ministry resembles a semi-independent feudal castle. Consequently, policy will greatly depend upon the appointed minister. For example, if PAS leader Abdul Hadi Awang is appointed religious affairs minister, then expect a much more conservative Islamic outlook by the Islamic apparatus under state control.

There will be no drastic change in policy direction, as the PN government like many before it almost totally relied upon the civil service to formulate policy. Social problems like community health, drug abuse, youth unemployment, child marriage, incest, sexual abuse in religious schools, and national water quality are unlikely to be tackled, just as previous governments have neglected them.

A recent survey found that the majority of voters, in the wake of the Pakatan Harapan government’s political and governmental chaos, actually preferred a Bumiputera coalition government. Nominally, PN received almost one million more votes than PH did in GE14. Under the current electoral system UMNO-PAS-Bersatu is the natural government, especially given the reinforcement of race-based politics. The shock, anger, and dismay towards the new Muhyiddin government comes primarily from urban areas, within malapportioned constituencies. Although there is a groundswell of anger towards Muhyiddin, the electoral powerbase, much more politically passive, is looking forward to financial assistance in a time of economic difficulty.

With the failure of PH to undertake electoral reform, Perikatan Nasional has a great advantage. Eliminating malapportionment would greatly benefit DAP and PKR, which no party is interested in doing. PH also failed to reintroduce elections for local government to bring the democratic system to three levels of government. This would have been to the advantage of DAP and PKR to show the public what they could practically do at a grassroots level to assist citizens. Democratic local government could have been a pivot point for the now opposition to one day return to government.

Where to from here? Muhyiddin made a sound strategic decision to delay the reconvening of parliament until 18th May. This will give him plenty of time to construct a ministry, settle them in, solidify his support in parliament with more defections coming his way, and allow PH to lose momentum. For PH, this is going to be time in the wilderness where it will lose some supporters to the point where a no confidence motion in Muhyiddin as prime minister succeeding would be impossible. Mahathir’s claim of 114 MPs supporting him will just evaporate.

This means PH will have to quickly settle back into opposition, contemplate how it is going to develop electoral leverage over the Malay heartlands, and regain support from Sabah and Sarawak. Lim Guan Eng’s comments that the Sarawak government would be bankrupt in three years, will come back to haunt PH. Sabah politicians are about to feud, increasing the difficulty of building any long-term alliances for now. The opposition has to work on a plan for the next election.

What we have learned over the last two weeks is that Malaysian political parties are still immature and can completely break apart over personality rather than policy rifts. Political parties appear to be just vehicles for power. Few politicians have altruistic motives, but rather ulterior motives for personal power and gain. The PH government, just like the new PN government haven’t come to power with any vision in mind. PH rather very quickly reverted back to the old crony-capitalism that has plagued the first Mahathir government administration.

Party hopping occurs because there are no deep ideological anchors. Anti-party-hopping legislation is not the solution, policy-based party politics is. There is a total lack of respect for the party-political process. If need be, leadership of a party can be hijacked as needed. Malaysia’s new political landscape is just a reconfiguration.