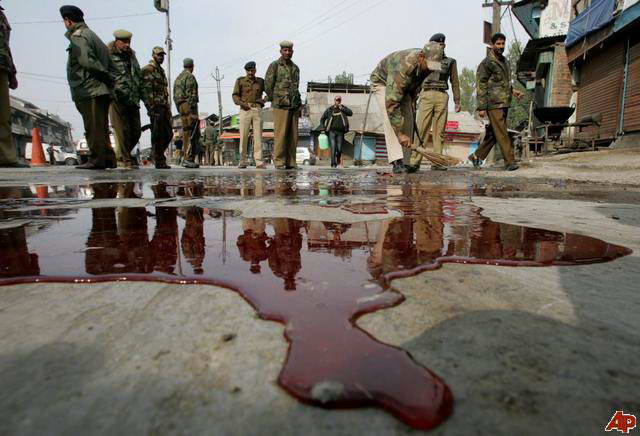 The Indian government has covered up hundreds of cases of human rights abuses, including extrajudicial killings, torture and enforced disappearances in the disputed territory of Kashmir, a new report has alleged.

Khurram Parvez, programme coordinator of Jammu Kashmir Coalition of Civil Society, told Al Jazeera on the release of the report, titled Structures of Violence: The Indian State in Jammu and Kashmir, that the Indian government had allowed systemic violence to take root in the Himalayan region hit by more than two decades of conflict.

Parvez, co-author of the mammoth 800-page report, released on Wednesday, said the International Peoples’ Tribunal and the Association of Parents of Disappeared Persons had documented more than 1,080 extrajudicial killings and 172 enforced disappearances, as well as cases of sexual violence that go back to the early 1990s. The report took two years to compile.

The document details 333 case studies of human rights violations and names some 972 alleged perpetrators responsible for the crimes. These include 464 army personnel, 161 paramilitary personnel, 158 Jammu and Kashmir Police personnel and 189 “government gunmen”.

“These crimes were happening with the full knowledge of higher level officers in the Indian government … they must be all held accountable by international law,” Parvez said.

‘Structure of violence and impunity’

The allegations detailed in the report are supported by official records and testimonies and Parvez said that prosecution should not be limited to the individuals.

“We acknowledge that these are individuals forming part of a structure of violence and impunity that allows a massive institutional cover-up here in the valley,” he said.

The report calls for the UN Human Rights Council to appoint a Special Rapporteur to investigate the crimes and appeals to the UN Security Council (UNSC) to exercise its power to refer the cases to the International Criminal Court (ICC). India is not a signatory to the ICC but the UNSC has the power to refer situations to the court.

Waheed-Ur-Rehman, spokesperson for the ruling Peoples Democratic Party in Jammu and Kashmir, said his party was looking into the claims made in the report.

“There have been some human rights violations in Kashmir … and it is a fact [that] mistakes have been made on both sides and ultimately Kashmiris have suffered,” Rehman told Al Jazeera.

“We are trying our level best to provide justice to the people who have suffered in the past. Justice can never be anti-state, people will get justice,” he said.
But Gautum Navalkha, a human rights activist and editorial consultant to the Economic and Political Weekly magazine in New Delhi, described justice as “a rarity” in the disputed region.

“Because of the militancy, Jammu and Kashmir is considered a ‘disturbed area’ […] and there are two types of laws: one for common Indians and another for the ‘disturbed areas’.”

“There is no possibility of justice in Kashmir under these circumstances,” Navalkha told Al Jazeera.

Indian-administered Kashmir has seen an increase in violence over the past two months, prompting UN Secretary General Ban Ki-moon to raise concerns in August at rising tensions along the de-facto border between India and Pakistan.

At the time, the UN chief urged India and Pakistan to exercise restraint and take all steps to ensure the protection of civilians who continue to bear the brunt of hostilities between the two nations over their claims to Kashmir.

Kashmir has been divided between India and Pakistan since both countries gained independence in 1947. Both nations claim the Himalayan territory in its entirety, with Kashmiris still staking a claim to self-determination. Since 1988, the Indian military has deployed hundreds of thousands of security forces to quell an insurgency against Indian rule.

In July, Amnesty International accused the Indian government of refusing to prosecute perpetrators of human rights abuses in the region.

According to Amnesty, more than 96 percent of all allegations of human rights violations pitted against India’s personnel in the disputed territory have been declared as “false or baseless”.

“Till now, not a single member of the security forces deployed in the state has been tried for human rights violations in a civilian court. This lack of accountability has in turn facilitated other serious abuses,” Minar Pimple, a senior director of global operations at Amnesty said.

In a rare deviation from the norm, a military court sentenced five Indian soldiers to life imprisonment for the murder of three Kashmiri men in 2010. Omar Abdullah, the then chief minister of Jammu and Kashmir, described it as a “watershed moment”.

Amnesty welcomed the move but cautioned that “for justice to be consistently delivered, security force personnel accused of human rights violations should be prosecuted in civilian courts”.

Over the past two decades more than 60,000 people have been killed in the insurgency, and the dispute remains a perilous red herring in India-Pakistan relations.-al-Jazeera