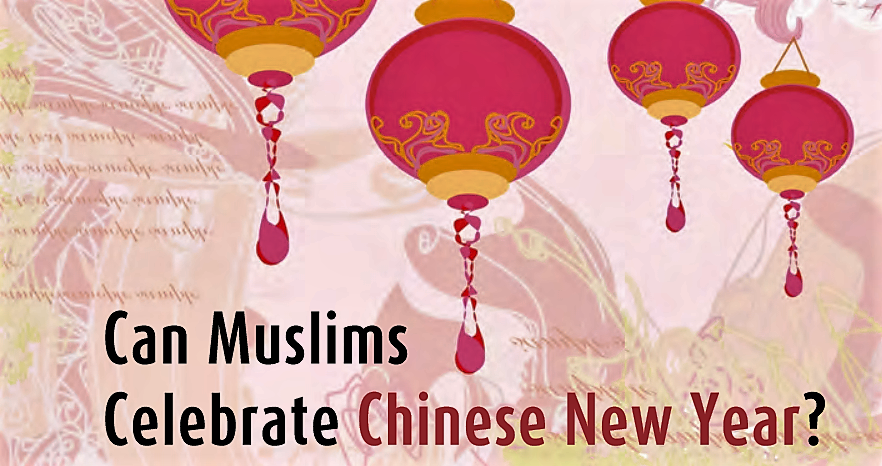 Before I became Muslim I did not know much about Chinese New Year. My only concern was to collect my ‘ang pow’ (red money envelope), watch the lion dance and eat as much as I could at my family’s reunion dinner.

During my teenage years, Chinese New Year was mostly about ‘ang pow’ – which says if you are single even at 60, you can still be entitled to a money envelope.

It is a big issue when a Chinese person embraces Islam. Some have experienced total isolation from their families and communities.

After my reversion to Islam, I tried to find out how to approach the Chinese New Year celebrations. Would it be appropriate for a Muslim to visit friends and families during this period? I came to understand that Islam celebrates diversity of cultures as long as they are not in direct conflict with the teachings of Islam.

But what cultural aspects does Chinese New Year exactly represent?

In Chinese mythology, a Nian is a beast that lives under the sea or in the mountains. Every spring, on or around Chinese New Year, it comes out of hiding to attack people, especially children.

The Nian is sensitive to loud noises and is afraid of the colour red. In the Chinese New Year customs such as decorating things in red, exploding firecrackers, and performing a lion dance were originally used to scare the beast away.

Some people display Chinese couplets on red banners to prevent the Nian from returning.

Numerous other traditions such as wearing red clothing or handing out red envelopes are also designed to protect against the Nian .

The Chinese word for ‘year’ is the same as the name of this beast. A phrase for celebrating Chinese New Year, ‘guo nian’ means ‘the passing of the beast’.

In ancient China people were mostly farmers. These farmers could rarely afford big feasts except after the harvest.

Harvest time occurred around the onset of spring. So to welcome spring people prepared foods that were not normally cooked at other times of the year.

Dishes such as fish, pork and chicken became part of family dinners on New Year’s Eve, known as ‘Reunion Dinners’. So basically according to this tradition Chinese New Year was celebrated to welcome the beginning of the new season according to the Lunar Calendar and the end of the harvest.

According to the mythological version, Chinese New Year is a legend with neither religious meaning nor a national one such as the fourth of July in America.

Those who subscribe to this version celebrate the New Year with a degree of superstition with actions aimed at scaring away the beast or bringing good luck.

This belief has no place in Islam and cannot be endorsed. However even with this version one can find action and customs which can be said to be neutral from an Islamic perspec tive such as the wearing of the colour red (as opposed to black, a colour associated with sorrow and sadness).

In my opinion the most authentic version is the second version. Chinese New Year is purely a cultural celebration.
However the entanglement of this celebration with mythology and legend even nowadays makes it difficult for Muslims to get involved.

Islam is a simple, easy and practical religion. When someone embraces Islam, any cultural or traditional expression which contradicts its directives is unlawful especially when the said cultures make life even more difficult for the practising believer.

It should be said that Islam does not, by default, discourage us from conforming to our cultural or national traditions.

For example, visiting relatives even if they are not Muslim, is strongly encouraged. Therefore the Chinese tradition of the Reunion Dinner can be considered to be acceptable.

A word of advice would be that when it comes to cultural celebrations, observing Islamic manners is a must but showing sensitivity to other cultures is also essential.

There are some dos and don’ts that can help Muslims celebrate Chinese New Year with their families and friends without compromising one’s beliefs.

– When visiting families and friends offer ang pow even if they are married.

– Attend reunion dinners with awareness of halal and haram foods. If you like to eat Bak Kwa, a delicacy made of dry meat, you can order it from halal Chinese butchers and you can even offer it to your family.

– Wishing the family members Xin Nian Kuai Re or ‘May Allah guide all of us’.

– Wear red, as long as the wording and design on the clothing do not have un-Islamic elements.

– You can enjoy watching the lion dance or dragon dance.

– Do not wear black. The Chinese believe black is a sign of mourning and sadness.

– Reading and listening to horoscope predictions is a common tradition among the Chinese. Don’t get involved.

– Avoid participation in Chinese ancestor worship and the ritual of welcoming the god of prosperity and Tian Gong, the Jade Emperor god.

– If you have doubts about the permissibility of the food you are offered, do not ask your hosts, they will be offended. If you’re not sure make an excuse.

– Do not open discussions about accidents or deaths during Chinese New Year. If any of your relatives have just passed away or you have attended a funeral ceremony, do not inform them. The Chinese believe that such a person will bring bad luck.

The above traditions may be considered superstitious but they are nevertheless an important part of Chinese culture. The main thing is to keep in touch with one’s family, especially parents, even if they are not Muslims.

This is beneficial and recommended by Islam. God has created us differently not for us to ignore each other but to know and understand each other. Mindfulness of other cultures can remove barriers and allow us to project our Islamic behaviour without being confrontational.

Lastly when visiting families take along some booklets about Islam and give them as a gift. Chinese people do not reject any gifts during this time.

God-willing this may provide an opportunity for them to know your faith at their own pace.- Islamtoday