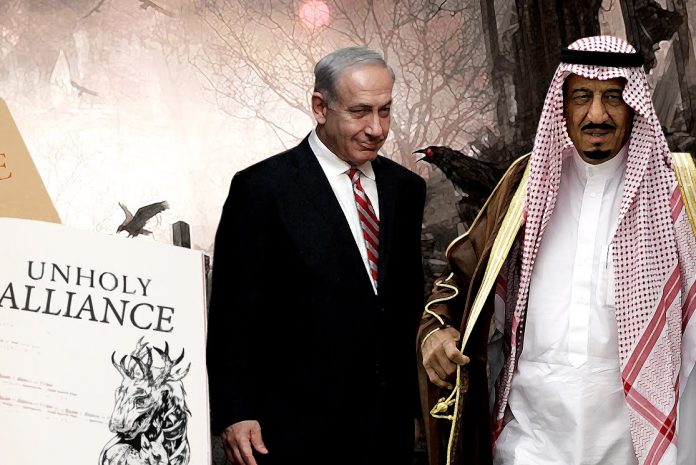 Israel and Saudi Arabia may seem unlikely allies in regional politics but recent developments have pushed Riyadh and Tel Aviv closer together, setting the stage for the Middle East’s strangest bedfellows.

The covert ties between Israel and Saudi Arabia, based on an alliance against the “common threat” of Iran, are part of a new regional paradigm, analysts say.

The inclusion of Israel as a potential partner reflects a break from the fragmented order in the Middle East, where since the early 2000s the United States has sought to create a hegemonic system to dominate West-friendly states, brought about by either elections or deposition.

Saudi Arabia, capitalising on its religious standing in the Arab world, broke through the ranks to establish its own order, one that included seeking ties with Israel on the basis of land for peace.

In tandem, it worked on the preservation of its Sunni identity and alliances to counterbalance Shia Iran’s influence.

According to Ofer Zalzberg from the International Crisis Group, this shifting political order must pertain to the parameters of the Israeli-Palestinian peace process, which the US and Saudi leaders see as an imperative condition for enabling such a regional cooperation.

“Giving birth to a visible Saudi-Israeli alliance that will deter Iran … is in many ways the very rationale for advancing Israeli-Palestinian peace in Washington and Riyadh,” Zalzberg said.

The White House, under the efforts of senior adviser and the president’s son-in-law, Jared Kushner, is busy devising a new plan to break the deadlock of the peace process, which President Donald Trump has described as “the ultimate deal”.

Their hopes lie on the support of regional powerhouse Saudi Arabia, which will depend on building closer ties between the oil-rich kingdom and Israel – despite the two not having overt diplomatic relations.

The motives of Saudi Arabia, said Kobi Michael, a senior research fellow at the Institute for National Security Studies at Tel Aviv University, are based on the shared strategic interest with other countries in the region, which he described as the “pragmatic Arab camp”.

“Egypt, Jordan, the Gulf states – excluding Qatar – have two strategic threats: Iran and the Salafi or radical Islamic terrorism,” Michael said. “Unfortunately, the US left a vacuum in the region which was filled by the Russians in Syria and by the Iranians and their proxies in other parts of the Middle East.

“Israel is perceived as the most reliable potential ally,” he continued. “Therefore, the Saudis understand pretty well that it is a good time to be good friends with Israel.”

According to Michael, Saudi Arabia has realised that its support of the Palestinian peace process has become a burden on its shoulders and that there are more issues that hold strategic importance.

Where it once drew up what became known as the Arab peace initiative for lasting peace with Israel in 2002, the country is now willing to push the Israelis and Palestinians to accept Kushner’s peace plan, Michael argued.

“The Saudis are much less obliged to the Palestinians than before and are willing to agree to an interim agreement – which is my interpretation of the US initiative,” Michael said.

“This is an opportunity for them to strengthen the religious importance and their authority of Mecca and Medina (the two holiest sites in Islam) at the expense of Jerusalem and the religious significance the Haram al-Sharif (Islam’s third-holiest site) holds, which in turn will strengthen their position against Iran,” he added.

Once the Palestinians will be pressured enough to enter the political process seriously, Michael added, an upgrade of relations between the Saudis and the Israelis will take place where it will transcend the covert layer.

“This will be a sort of incentive for the Israeli leadership to make some further moves in the peace process with the Palestinians which they will see as something they can benefit from – the normalisation of relations,” Michael said.

Khalil Shaheen, a political analyst based in the West Bank city of Ramallah, said that the “reordering” of regional threats will come at the expense of the Palestinian cause.

“The issue of normalisation is no longer controversial,” he said. “But it is important to realise that the thawing of relations between Arab countries and Israel is not connected to bilateralness.”

Israel has a military, nuclear and hi-tech capability not matched by other countries in the region, he added. The alignment of some of the Arab countries to the interests of Israel is due to maintaining their control under hegemonic arrangements.

“The decline of US power in the Middle East has resulted in Israel filling in the gaps that US foreign policy would have previously filled,” Shaheen explained.

“These Arab states are motivated by the survival of their regimes, and that is what pushes them to the stronger state in the region,” he added.

Iran is an ‘excuse’

Although Saudi officials remained silent on underhanded relations, their Israeli counterparts have made no efforts to hide that meetings between the two countries have taken place, with invitations for future visits.

The recent domestic upheaval in Saudi Arabia, which saw the arrest of princes, ministers and high-profile businessmen carried out by Crown Prince Mohammed bin Salman was seen as a sign to crush dissent under the banner of cracking down on corruption.

“The political changes in Saudi Arabia and the desire to consolidate power is the main reason why these relations with Israel were opened,” said Mahjoob Zweiri, an associate professor with the Gulf Studies Program department at Qatar University.

“Yet Iran, which is used as an excuse, isn’t too worried about this potential alliance,” he continued. “This will, in fact, help Iran to present itself as a soft power to better its image in the region” – by means of presenting itself as a bastion of resistance against Israel.

Ofer Zalzberg said that the Israeli prime minister will have to tread carefully when it comes to reassessing ties with Saudi Arabia.

“Netanyahu is caught between how Mohammed bin Salman’s domestic reforms will transform Saudi Arabia to a country that will be easier for Israel to agree on a regional future with, and apprehension about the fate of these reforms and indeed, of bin Salman’s rule,” Zalzberg said.