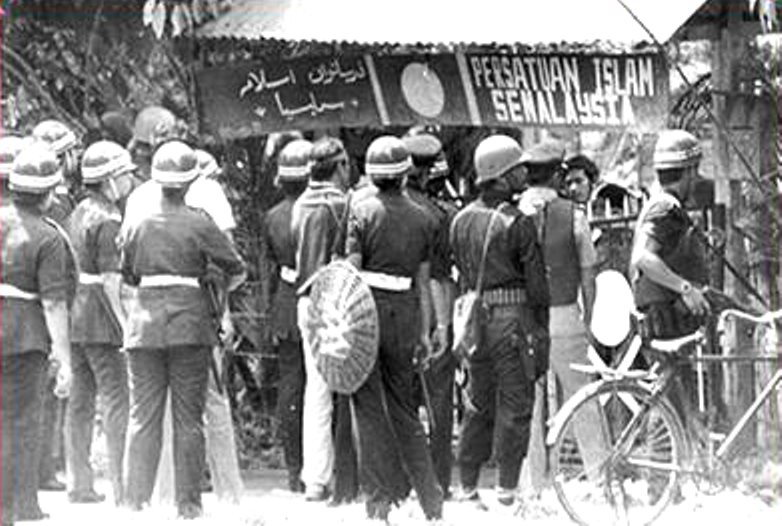 In relation to the murder of JAIP’s enforcement chief Allahyarham Raffli Abdul Malek, your newspaper yesterday published an article listing major violent cases involving deviant groups in the country. Among those listed were Imam Mahdi, Al-Ma’unah and Tuhan Harun. Regrettably, you erroneously decided to include the late Ustaz Ibrahim Libya and his followers to that list.

The 1985 Memali incident was indeed a sad tragedy for PAS supporters in particular and a definite black mark in the nation’s history. It was an act of betrayal by Tun Mahathir Mohammad, then the country’s Prime Minister and his incompetent administration that has resulted in the untimely death of as-syahid Ustaz Ibrahim and 14 other villagers. Even as the 28th year anniversary of the incident is fast approaching this 19th November, the martyred people of Memali are still relentlessly blamed by the government and their machinations (and that include The Star) with unfair, one-sided accusation of violence.

To be certain, many of the events leading to the incident that would have brought justice to the story have been shielded from the public.

For example, only the learned few knew that an order was sent on the night before the incident to the Sungai Petani army camp commandant to deploy troops to Baling for a planned attack on a purported communist camp only for the commandant to later realize that the real target was that the house of the late Ustaz Ibrahim. Aware of the late Ustaz Ibrahim’s stellar reputation as an influential and highly respected Islamic scholar, the commandant reckoned that the planned attack was surely unjustified. He brought his argument to a senior Bukit Aman official and even making a direct plea to Tun Musa Hitam (then Datuk, Home Minister) to reconsider the plan.

Despite the effort, an order to attack was issued still. The villagers were evacuated and at 8.15 a.m. the offensive began.

The story above is just one of the many sides of the Memali incident that would have made any reasonable citizen to question the so-called truth presented by the Government.

Was there enough consideration made when advise from the military command on the ground was clearly ignored? Did the rules of engagement were properly followed? More importantly, how can the late Ustaz Ibrahim and the villagers were accused of violence when the attack was first started and provoked by the security forces?

To the very least, has not the family and kin of those martyred that day truly deserve our condolence and sympathy?

For I am sure, a newspaper of such stature as The Star would have noticed the discrepancies surrounding the Memali incident. Yet your paper yesterday decided not only to continue publishing all the fabricated lies accusing Ustaz Ibrahim Libya and his followers as violent, your paper has further up the ante by branding those martyred as deviant too.

The Star in this case has committed at least 3 wrongs:

1. Accusing the late Ustaz Ibrahim and his followers as violent. The fact is that the Alor Star High Court, after a prolonged legal battle, decided that the government should pay compensation to the kin of those killed by the security. The compensation was miniscule compared to the ridicule and injustice that have been inflicted. Nevertheless, the verdict finally placed the burden of guilt onto the government for the violence and brutality that they have committed. So how then the late Ustaz Ibrahim and his followers can be blamed for violent conduct when it was the government who was asked to pay compensation?

Until today, no mainstream media including The Star has taken the effort to correct the government’s fabrication, what’s more to take the government to task for this major debacle. So much expectation, so little hope for the moral power of the Fourth Estate.

The classification was first opined by the highly respected Tuan Guru Hj. Omar Zuhdi of Sekolah Pondok Lanai, Kedah and later validated by Tuan Guru Hj. Yahya Junid and Ustaz Azahari Abdul Razak , both members of the Kedah Fatwa Council. The two were later unceremoniously bumped out from the council because of their vocal opinion on the issue. Despite the council’s counter edict, the public generally accepted those killed that day by the security forces as syahids.

So where is The Star’s rationale for this deviated claim? We see your article as no less than furthering a sinister agenda to smear the name of late Ustaz Ibrahim Libya, the people of Memali and PAS itself.

Is The Star implying that the Sultan of Kedah, our current Yang Di Pertuan Agong, has erred in his action by visiting the grave of this so-called deviant terrorist? The article is certainly an affront to His Highness and the Kedah palace.

I stand in agreement with the national PAS Youth Chief, YB Nasrudin Hassan and the Kedah state PAS Youth Chief, Mohd. Nasir Zakaria that your paper should retract the article and apologize for the disrespect and dishonest presentation.

I also stand in agreement with the PAS Youth stance that a legal remedy would be worth pursuing should your paper fail to retract the article and apologize for the inconveniences within these next 3 days.

In Islam, there is no such thing as the truth being buried in the grave forever. There is always the “hereafter” where secrets will be unveiled and adjudged. But wouldn’t it be bittersweet if some truths such as the Memali incident goes mainstream “here” instead of waiting for the “hereafter”?

The Hillsborough tragedy of 1989 in the UK, which saw 96 Liverpool’s supporters trampled to death, was one fine example of a truth going mainstream. For 24 years, one truth after another was exposed yet suppressed by the establishment. And when the government, the police and the mainstream media finally agreed to accept accountability instead of the usual blame game, it helps start the process of national healing and reconciliation from what is deemed as one of the darkest moments in modern English history.

Perhaps there is a certain explanation somewhere to relate the Hillsborough tragedy finding closure to Liverpool FC rise to English soccer top flight – of course to much ire of our Prime Minister who once famously proclaimed that Liverpool FC belongs only to the History Channel.

And like the Hillsborough tragedy, with the principle of truth being universal, understanding the Memali incident can also carry us far and beyond into our own process of national healing and reconciliation. Your paper, dear Mr. Editor, is pivotal to helping the many hidden truths such as the Memali incident goes mainstream. And The Star can start the process with a heartfelt apology and a sincere retraction.

And to the kin of those martyred and people of Memali who was cruelly wronged that day and continuously denied of the wholesome truth and justice till today, this is PAS commitment to all of you – that you’ll never walk alone.