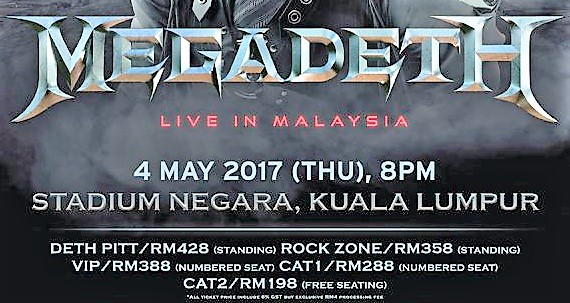 PAS Youth questioned, why its concerts here this week were approved when it had been prevented from performing here in 2001.

The movement did not list out what issues it has with the band or its performances, calling it a “negative influence”.

“PAS Youth is questioning the authorities’ resolve in addressing this event, when they so clearly tout the Islamic entertainment guidelines,” its information chief, YB Ustaz Hishamudin Abdul Karim, said in a statement.

He further asked how the nation and Malaysians would benefit from the event, suggesting it was little more than an opportunity to witness unhealthy cultures.

Hishamudin then insisted that Islam was not against entertainment.

“PAS Youth is confident that PAS, if given the mandate to rule, will not block the organisation of concerts that meet the guidelines set by religious authorities to preserve the prosperity of the public,” he added.

PAS Youth has a history of protesting against foreign performers.

Last year, it did so against US pop singer Selena Gomez due to her “sexiness”.

Megadeth will perform at the National Stadium in Kuala Lumpur tomorrow and Friday.