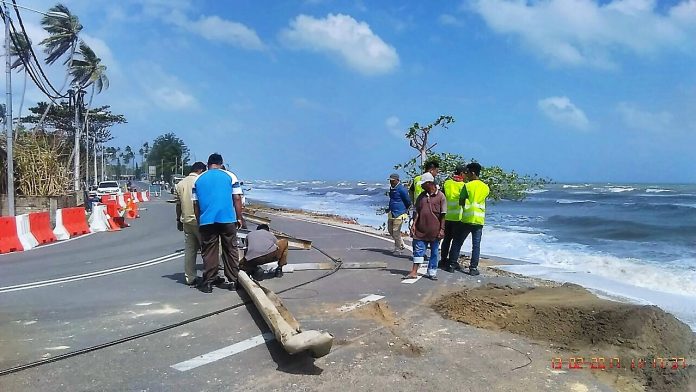 ABOUT 35 people from six families in Kampung Tanjung Gelam, Kuala Terengganu, are living in fear of critical beach erosion just a few metres from the kitchens of their houses.

According to the villagers, the erosion has been a long-standing problem in the village but it worsened a few years ago.

They say that some neighbours were forced to move out of the area after their houses were destroyed by strong waves.

In the most recent incident, Mohd Yahya Muda, 53, said the erosion caused by strong tidal waves on Feb 12 swept away the bathroom at the back of his house.

He said the 10.30pm incident was the second time strong waves had struck his house. In the first incident last year, the waves again swept away the bathroom.

“We cannot sleep well at night, especially during high tide and strong winds. But, where else can we go?

“Our only hope is for some protection along the beach or houses at a new location. As it is, we are waiting for disaster to happen.”

Ismail Said, a food stall owner, said the 10 stalls along the affected area might be swept away as the erosion was less than 50m away.

“This used to be a popular place, but with the strong waves and winds, most people now avoid the area. Business was also affected by the damaged road caused by recent strong waves.”

State Drainage and Irrigation Department director C. Poobalan said temporary preventive measures, such as placing rocks along the affected area, had been taken as soon as the department received reports on the damaged area.

He said the move was not only to protect residential areas, but also stalls, roads and public structures.

“Repair work started yesterday and we hope it can protect the houses and reduce damage to the coastline that has not been protected by the breakwater.

“However, we have to make a thorough study on the effects of the waves and find the best solution. We are discussing this matter with the state government. Once finalised, we will forward it to the Federal Government for approval and allocation,” he added.

RUU355 To Be Presented To States Before Tabling In Dewan Rakyat

‘Changes to RUU 355 being drafted’