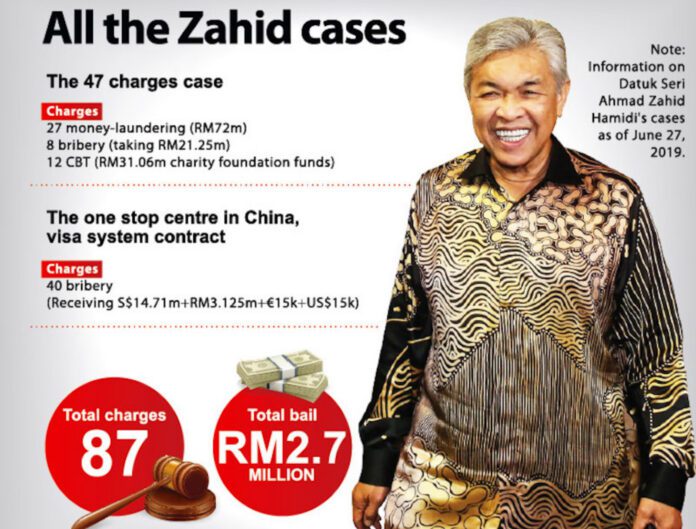 Tun Dr Mahathir Mohamad insisted that Datuk Seri Dr Ahmad Zahid Hamidi
should not be given any position in the government.

He said, the appointment of the Deputy Prime Minister is seen putting pressure on the judiciary to carry out their responsibility fairly and fearlessly in the Umno president’s court case.

This is because the Bagan Datuk Member of Parliament currently faces 47 corruption, breach of trust and money laundering charges in court.

The former Prime Minister is of the view that Zahid’s appointment to the second highest government position will unsettle the court, which may have to decide in his favour.

“That (appointment) should not have been done because he is facing a court case and there is a possibility that he will be found guilty and punished.

“Such people should not be given such a high position because the Deputy Prime Minister is the person who will take over the duties of the Prime Minister if something is to happen and we will get a Prime Minister who is still facing court charges.

“People will see that because he is the Deputy Prime Minister, the court cannot take action against him. This will disrupt the court in making a decision. They may come under pressure and the law may be set aside.

“This means that in our country, there is no longer the rule of law. A government that prioritises the interests of certain people and causes it (the government) to be disrespected by the people,” he said in an exclusive interview with BH at the Perdana Leadership Foundation here recently.

The former Langkawi MP said this when asked about the appointment of Zahid, who is still facing a court case, as Deputy Prime Minister in the Cabinet of the unity government led by the Prime Minister, Datuk Seri Anwar Ibrahim.

On Jan 24, the High Court ordered Zahid to defend himself against 47 charges of corruption, breach of trust and money laundering of Akalbudi Foundation funds, after the prosecution succeeded in establishing a ‘prima facie’ case for all the charges involved.

Dr Mahathir insisted that Zahid should also have resigned as Umno President and should have declined to be appointed as Deputy Prime Minister after his party lost badly in the 15th General Election (GE15).

“In the past, after GE14, Datuk Seri Najib Razak as Umno President after losing and facing the possibility of being brought to court, resigned. Zahid should also have done the same because he faces a similar problem as Najib, so he should not hold any position,” he said.