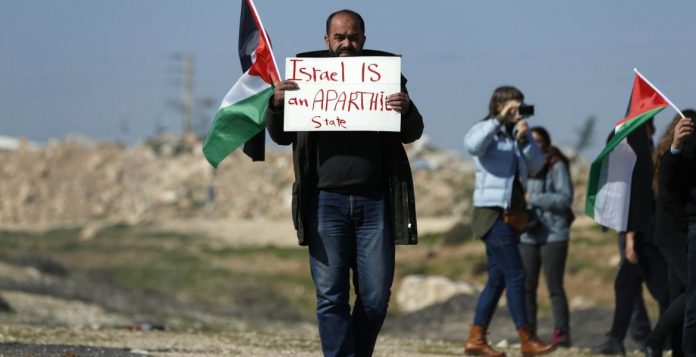 Report from B’Tselem highlighting Israel’s apartheid character is a welcome development, but this finding cannot be divorced from the state’s oppressive settler-colonialism

B’Tselem, a leading human rights group in Israel, recently released a report concluding that Israel is an apartheid state, with a regime of Jewish supremacy stretching from the Jordan River to the Mediterranean Sea.

The report received widespread international media attention and was described as a “watershed” moment. But it was only a watershed moment for B’Tselem, which was using the term “apartheid” for the first time in its three-decade history, and for an international community that is so infatuated with Israeli voices. For Palestinians, none of this is new.

B’Tselem is not the first human rights group to call Israel an apartheid regime. In 2009, Palestinian and South African scholars published a comprehensive report that determined Israel was committing the crime of apartheid. Two Palestinian human rights organisations, Adalah and Al-Haq, were part of this initiative.

Two former UN special rapporteurs on human rights in Palestine reached a similar conclusion. In 2007, John Dugard determined that “elements of the occupation constitute forms of colonialism and of apartheid”. And, a few years ago, Richard Falk co-authored a report finding that Israel has established “an apartheid regime that oppresses and dominates the Palestinian people as a whole”. The UN secretary-general was quick to distance himself from the report, ordering its removal from the UN website.

Typical of western racism, Israelis are deemed more reliable and esteemed, and their contributions more valid than those of Palestinians who experience apartheid, colonisation and occupation every day.

Still, the B’Tselem report is a welcome development. As academic Rafeef Ziadah points out, it comes “in the face of an orchestrated silencing campaign, which attempts to foreclose debate before it even begins. In this sense, it is relevant that an Israeli human rights organisation has stated what Palestinians have been arguing for years”.

While the use of the apartheid framework in relation to Israel is not new, it is gaining momentum amid the one-state reality. While the occupation paradigm is built on the false assumption of temporariness and sustains a distinction between 1948 and 1967 territories, the apartheid framework recognises that Israel is the effective governing power between the river and the sea, where it enacts a racialised regime.

Under international law, apartheid is a crime against humanity – and the evidence clearly shows that Israel is an apartheid state. Throughout the territory between the river and the sea, its political and legal systems are all geared towards ensuring Jewish racial supremacy and domination. Amid the Covid-19 pandemic, Israel refused to vaccinate the millions of Palestinians who live under its control, while vaccinating Israelis, including Jewish settlers, in the occupied West Bank.

But Palestine cannot be understood merely in terms of apartheid, as this offers only a limited and partial understanding of the situation. Israel is a settler-colonial state that is practising both apartheid and permanent occupation.

The conversation emerging in liberal circuits around apartheid and Palestine fails to recognise settler-colonialism as the overarching structure of the Israeli state. We have seen such dynamics in Peter Beinart’s recent call for one binational state, in which apartheid is acknowledged, but not Zionist/Israeli settler-colonialism.

Racial domination is treated as a standalone feature of the Israeli state, disconnected from the settler-colonial enterprise in Palestine. Even when apartheid is acknowledged, there is no reckoning with Zionism as a racial ideology and movement.

B’Tselem’s report is a perfect example of this new approach, which is coming to the forefront of liberal progressive critiques of Israel. The report does not mention colonisation or settler-colonialism even once. Paradoxically, one of B’Tselem’s board members commented: “Change of any kind begins with a proper reading of the reality that one seeks to alter; to look at that reality with open eyes, and to call it by its name.”

Apparently, to B’Tselem, settler-colonialism is not part of this reality.

The use of apartheid as a sole framework is in line with increasing attempts to limit the understanding of the question of Palestine to rigid legal categories. International law is important, and it should be leveraged to our advantage. But it would be dangerous to let international law alone guide our understanding of the reality in Palestine or the nature of our political claims. The question of Palestine is a political issue, not merely a legal issue.

This is not to say that we should abandon the apartheid framework, but rather that we should be cautious of liberal readings of Israeli apartheid. Palestinians were using the apartheid analogy long before it became a crime against humanity. Comparing Palestine with apartheid South Africa has a long, radical history that predates the “recent” discovery of apartheid by some Israelis. Palestinians saw South Africa, like Palestine, as a racial, settler-colonial state, and themselves as part of a larger anti-colonial, anti-imperial and anti-racist global movement.

Palestinians have been offering political and intellectual analyses on the question of Palestine for decades. But even when Palestinians use apartheid as a framework for analysis, it does not come at the expense of the settler-colonial framework; it supplements it.

Israeli organisations, scholars and activists are not – and should not be – the arbiters of what Israel is and is not, or what the solution should be. The erasure of settler-colonialism in the conversation on Israeli apartheid risks displacing decolonisation in favour of liberal projects of equality. It configures Palestine as a liberal question, rather than a colonial one.

Decolonisation is not a metaphor or a buzzword thrown around easily. While it may not be easily defined, decolonisation is certainly not a synonym for liberal projects of equality, even as it is increasingly being co-opted as such. Unlike liberal equality, decolonisation demands the dismantling of settler-colonialism, its institutions and its logics. Our freedom depends on it. Source: Middle East Eye