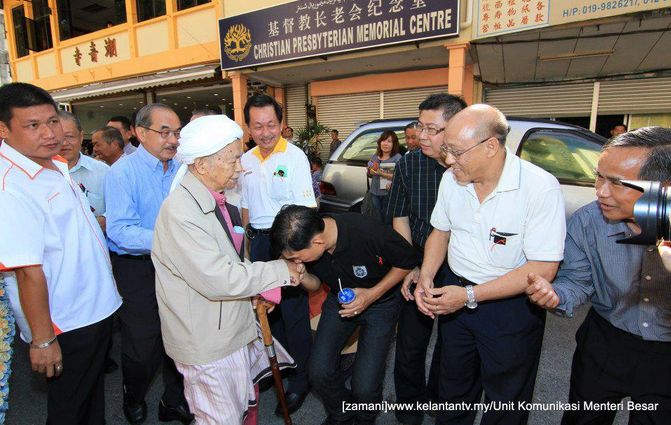 Dato’ Bentara Setia Haji Nik Abdul Aziz bin Nik Mat (10 January 1931 – 12 February 2015) was a Malaysian politician and Muslim cleric. He was the Chief Minister (Menteri Besar) of the state of Kelantan from 1990 to 2013 and the Mursyidul Am or spiritual leader of the Pan-Malaysian Islamic Party (PAS) from 1991 until his death in 2015.

Nik Aziz retired as Chief Minister of Kelantan at the 2013 election. PAS was re-elected and Nik Aziz’s deputy, Ahmad Yaakob, took his place. Over the ensuing two years, Nik Aziz became increasingly ill with prostate cancer, and died on 12 February 2015 at his residence in Pulau Melaka, Kota Bharu.

His death triggered a profound sadness to the members of PAS and all Malaysians who love peace. He was a leader of the people-oriented and more pleased with the way he treats people regardless of race and religion.

A leader who is honest, trustworthy and hard to replace. His death is a tremendous loss for PAS members and Malaysians in general.

Sarawak PAS would like to express condolences on his death, May Allah forgives him and put his soul with the spirit of the righteous people.