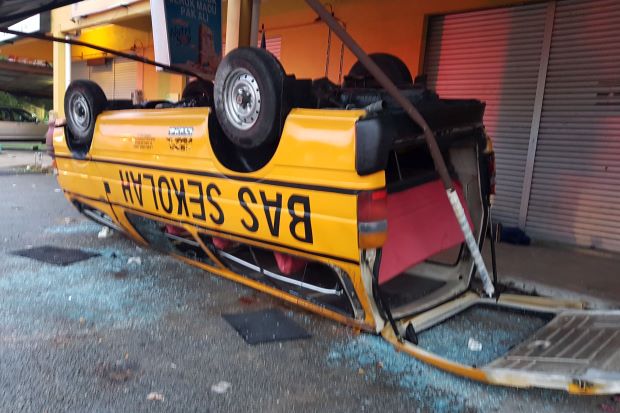 KUALA TERENGGANU – Three students suffered serious injuries when the school van they were travelling in turned turtle in an accident on Sunday (Oct 7) here.

Ten other students and the driver sustained minor injuries in the 6.15am incident.

The van was on its way from Jalan Bukit Tunggal to the Chung Hwa Wei Sin school in Kuala Terengganu.

According to witnesses, a pick-up truck had hit the van on the side and the impact caused the vehicle to turn turtle.

A spokesman with the Fire and Rescue Department said the truck had also hit the awning of a nearby shop.

According to state Traffic chief Supt Abd Razak Hasan, the truck had tried to avoid another car before it went out of control and hit the school bus.

The victims were sent to Hospital Sultanah Nur Zahirah for treatment.

When met, one of the passengers, 15-year-old Leong Yang Yuan said many of his classmates were asleep before the mishap.

“I was awakened my this flash of light and next thing I knew, the bus had overturned.

“We were very scared,” said the Form Three student who sustained scratches and wounds to his hands.