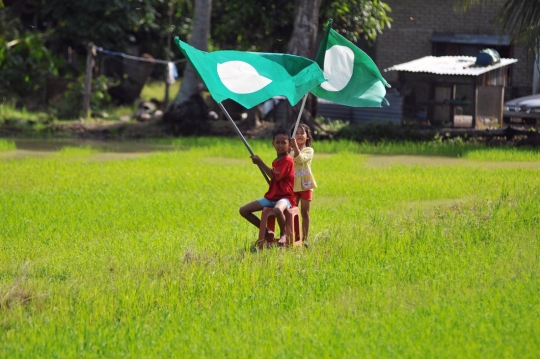 PAS managed to keep its hold on the farming constituency of Sungai Limau in Kedah state, but saw its vote majority slashed to a mere 1,084 votes in today’s by-election.

Azizan was also Kedah menteri besar for a term after the 13-party BN coalition lost its grip on the northern state in the 2008 general election.

During the May 5 polls this year, a total 24,349 voters turned out and PAS had won with a comfortable 2,774-vote majority.

Many voters, of which 93 per cent are Malays, are still strong PAS supporters with a great respect for the late Azizan but PAS has voiced concern over the enormous amount of allocations being promised and the gifts being handed out in the last few days.

Though Dr Ahmad Sohaimi is a local, many villagers do not know him but Azam, as a protégé of Azizan, is rather well known so PAS may still lead in the polls today due to villagers’ familiarity with Azam.

PAS has also been agressively going from house-to-house, using the direct approach rather than just depending on various programmes and ceramahs, and this may work in their favour too as the rural folks preferred a representative who will go down on the ground to talk to them, listen to their issues and resolve their problems for them.