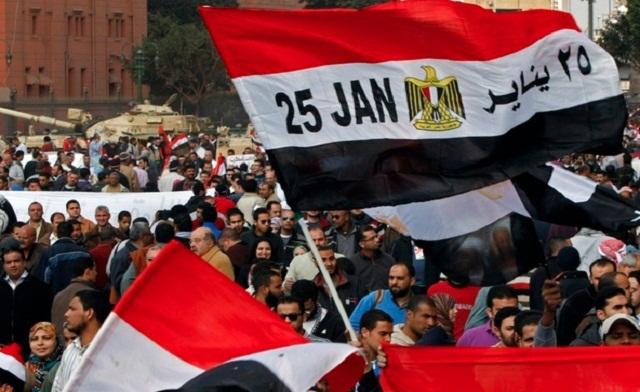 On January 25, seven years ago, the Muslim Brotherhood participated, with all spectrums of the Egyptian people, in the greatest popular revolution in the modern era, which inspired the World with its nonviolence and strength, as well as the melting of all Egyptians in its pot, presenting a model of the finest civilized revolution, and insisting on the removal of the tyranny. Meanwhile, revolutionaries showed a great keenness regarding their country, its interests, its citizens unity, its people’s aspiration toward freedom and social justice, placing their people’s dream before and above all other interests, groups, parties and ideologies.

This revolution was truly the revolution of the entire Egyptian people, without exception; all the slogans disappeared, and one slogan rose calling for freedom, demanding social justice. And the national flag of Egypt rose above everyone. The revolution scene dazzled the World, and many of its leaders said that they are learning from the Egyptian Revolution model and the actions of Egyptian youth.

The success of this revolution was unparalleled: it managed to overthrow the head of the tyrannical, oppressive regime in only 18 days. Were it not for the betrayal of the military coup junta, their conspiracy against the dream of the Egyptian people, their overthrow of the fledgling democratic experiment, and the kidnapping of the first elected civilian president in Egypt’s history; the Revolution, the nation and the people would be today in a different situation.

The junta of the military coup committed the most heinous crimes and massacres in Rabaa and Nahda squares. They burned the bodies of the martyrs and bulldozed them. They executed the wounded and burned the field hospital. Their massacres continued against the Egyptian people, the revolutionaries, as well as the military and police recruits. Churches and mosques were exposed to violence and bloodshed. Everyone, in the range of the military coup authority, is now a free target for the regime to achieve its ill ambitions and clinging to power.

The killing of innocent people by the military regime takes several shapes. Some are assassinated in the streets or their homes; others face slow death in prisons and detention centers; others are killed by death sentences adjudicated by politicized military or civilian courts. Innocent souls have no value or immunity in the eyes of these criminal murderers. And justice, as a supreme value, has no regard in the jungle law exemplified by the treacherous coup.

The military regime continued the series of betrayals by abandoning land and sovereignty. The military regime has abandoned the islands of Tiran and Sanafir to the Saudi Arabia, and has become an international conduit for the benefit of the Zionist entity. They also gave up natural gas fields in our territorial waters in the Mediterranean Sea to Greece and Cyprus. They squandered Egypt’s historical rights in the Nile waters when the regime head signed the framework agreement, with Sudan and Ethiopia, which explicitly has approved Ethiopia’s right to build the Renaissance dam, which threatens Egypt’s water security.

One of their most treacherous betrayals is what they are committing today in Sinai so as to separate it from Egypt, in favor of the security of the Zionist entity, forcibly displacing the people of Rafah, demolishing their homes and water wells, bulldozing their olive trees, and establishing a buffer zone along the border with the Zionist entity.

The military regime attempts to involve the Sinai tribes in the civil war, along with the systematic daily killing of the people of Sinai. The most bloody scene was the massacre of Al Rawdah mosque. The military coup regime adopted the so called “Deal of the Century” promoted by Trump, aims to undermine the Palestinian cause and resettle Palestinians in part of Sinai.

The military apparatus took over the Egyptian economy and plunged it into debt. It was also mortgaged to international lending institutions. The Egyptian pound was devalued and its purchasing power deteriorated; thus, the Egyptian people were overwhelmed by successive waves of prices’ inflation. All economic initiatives that were claimed to be Egypt’s gate to progress and prosperity, such as the additional Suez Canal waterway, the one million housing units project, the cultivation of 2 million acres, and the new administrative capital failed to materialize any benefit for the Egyptian people and its living situation.

On this occasion, the Muslim Brotherhood affirms the following:

First: The need to achieve unity among revolutionary factions based on the common goals of ending the coup, and the participation of everyone without exception in establishing a modern democratic civilian state, and sharing the sacrifices required to save the homeland from the clutches of the military junta.

Second: Adhering to the January 25 revolution objectives of dignity, freedom, and social justice, as well as restoring the people’s democratic entitlements and the legitimacy of popular will.

Third: Adhering to the rights of the martyrs, detainees, and the wounded, and bringing all aggressors to justice and fair trials.