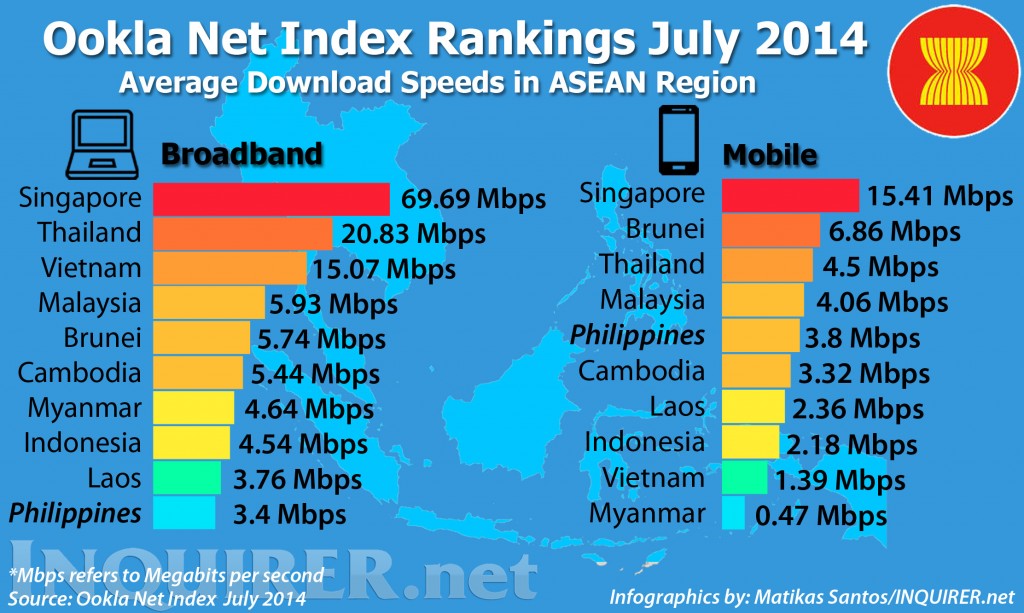 Malaysia has been ranked behind Sri Lanka and Thailand in average Internet speeds over the second quarter this year, as Asian countries set global benchmarks in the 2015 State of the Internet (Soti) second quarter report.

The top-three countries on the global ranking are all from Asia, with South Korea topping the list with an average connectivity speed of 23.1 Mbps.

Hong Kong was second with an average speed of 17.0 Mbps, followed by Japan which averaged at 16.4 Mbps.

Singapore – which ranked 14th with an average speed of 12.7 Mbps – however, recorded the highest global peak connection speed at 108.3 Mbps.

The global rank for peak connection speeds was also dominated by Asian countries which filled out the top-five spots, with Hong Kong behind Singapore with a peak connection speed of 94.8 Mbps, followed by South Korea (83.3 Mbps), Japan (75.1 Mbps) and Taiwan (74.5 Mbps).

Malaysia’s peak connection speed topped out at 36.5 Mbps, placing it 57th globally and behind Thailand which ranked 20th with peak speeds of 51.5 Mbps.

Malaysia’s broadband adoption also lags behind its Asian neighbours, settling in 72nd place internationally with 55 per cent of its population with access to speeds of above 4 Mbps.

Comparatively, Sri Lanka – which is in the top-50 for broadband adoption – has provided access to connection speeds above 4 Mbps to 77 per cent of its population.

The percentage of Malaysians with access to speeds above 10Mbps, however, is far lower at 4.5 per cent, though only the top-10 countries globally have provided high-speed connectivity to at least 50 per cent of their population.