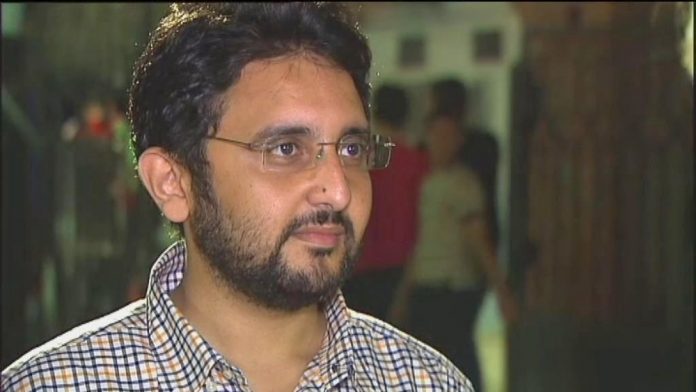 Gehad El-Haddad, jailed spokesman of the Muslim Brotherhood, began a hunger-strike in notorious Aqrab Prison where he is held, after getting thrown in a ‘discipline cell’ as punishment for his New York Times article titled “I’m a Member of the Muslim Brotherhood, Not a Terrorist” – published in February, which reiterates the organization’s stances.

Dr Mona Imam, El-Haddad’s mother, said her son is being treated very badly since the New York Times published on February 22 an article he penned.

She further said the prison administration transferred her son Gehad to an extreme solitary confinement cell, allowing him none of his medicines, and no exercise at all, and continued a total ban on visits for him which began in September 2016.

Moreover, Dr Mona Imam said her son Gehad began a hunger strike, which he will escalate, as the only means open to him to protest violations, no matter what the pain or dangers this will cause him, especially since the prison administration had already started starving him in recent weeks.

“There are no fluids he can take to reduce the dangers of the strike. He only has access to tap water – dirty brown and stinking water. Nothing else is allowed.

“These criminals have left him lying in his cell; knowing fully well that he could lose consciousness at any moment as a result of the hunger-strike, as happened to him previously, while no-one can even hear his voice, if he shouts for help in such an emergency.

“Aqrab Prison’s criminal administration have proved the truth of the motto ‘Dying to Live’: going on a hunger-strike until death, as the only means of survival!”

Mona stressed that she holds the Aqrab Prison administration, the prison service and the National Council for Human Rights fully responsible for the life of her son Gehad El-Haddad.

The New York Times had published a leaked letter from El-Haddad in which he said: “I write this from the darkness of solitary confinement in Egypt’s most notorious prison, where I have been held for more than three years. I am forced to write these words because an inquiry is underway in the United States regarding charges that the Muslim Brotherhood, an organization to which I have devoted years of my life, is a terrorist group.

“We are not terrorists. The Muslim Brotherhood’s philosophy is inspired by an understanding of Islam that emphasizes the values of social justice, equality and the rule of law. Since its inception in 1928, the Brotherhood has lived in two modes: surviving in hostile political environments or uplifting society’s most marginalized. As such, we have been written about, spoken of, but rarely heard from. It is in that spirit that I hope these words find light.

“We are a morally conservative, socially aware grass-roots movement that has dedicated its resources to public service for the past nine decades. Our idea is very simple: We believe that faith must translate into action. That the test of faith is the good you want to do in the lives of others, and that people working together is the only way to develop a nation, meet the aspirations of its youth and engage the world constructively. We believe that our faith is inherently pluralistic and comprehensive and that no one has a divine mandate or the right to impose a single vision on society.”

***Gehad El-Haddad’s NYT Article in full: I Am a Member of the Muslim Brotherhood, Not a Terrorist