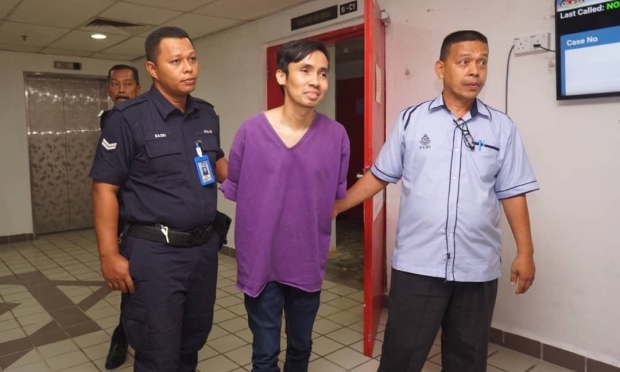 KUALA TERENGGANU: A former director of Yayasan Bakti Negara Terengganu (YBNT) was charged at the Sessions Court here today with another 50 counts fraud involving Umrah packages worth over RM130,000.

Mohd Adam Mohd Ghazali, 31, who was charged in two courts, pleaded not guilty to all charges, which involve more than 30 victims.

The fraud was allegedly committed through the Terengganu state director of education, resulting in the victims depositing between RM3,000 and RM15,000 each into the company’s account.

The offences was allegedly committed at several premises including the YBNT office in Jertih, Besut; shopping malls and several banks in Kuala Terengganu, Besut, Setiu, Hulu Terengganu, Dungun and Kemaman, from June to Nov 2016.

Mohd Adam was charged under Section 420 of the Penal Code which carries a jail term of up to 10 years, with whipping, and may also be liable to a fine, if convicted.

The accused was also ordered to report to the Sessions Court twice a month.

Azman set Aug 7 for mention, while the remaining cases under Jamaludin were set for hearing on Aug 28.

The prosecution was handled by Deputy Public Prosecutor Ahmad Hafizuddin Manjur Ahmad and M. Lishantini, while the accused was represented by counsel Mohd Hayyatuddin Mohamad and Che Amir Che Musa.

Yesterday, Mohd Adam pleaded not guilty to 26 other counts of fraud, and the Sessions Court had allowed him bail at RM40,000 in three sureties and set Aug 28 for mention.